Facts About the Titanic 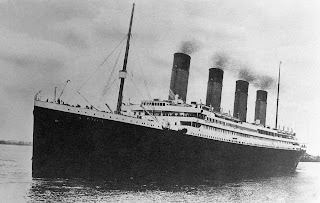 Early in the morning on April 15th, 1912, the British passenger liner RMS Titanic, believed to be unsinkable, hit an iceberg and sank. It was the Titanic's maiden voyage en route from Southampton in the United Kingdom to New York City in the United States. The ship was filled with some of the wealthiest people in the world as well as many emigrants seeking a new life in North America. Although the Titanic was built to be unsinkable, it was equipped with life jackets and lifeboats. Unfortunately there were only enough lifeboats to carry 1,178 people and there were approximately 2,223 people aboard the ship, including crew and passengers. 1,517 people lost their lives. Only 706 people aboard the ship survived.

The ship burned around 600 tonnes of coal a day – hand shovelled into its furnaces by a team of 176 men. Almost 100 tonnes of ash were ejected into the sea every 24 hours.

The ship's interiors were loosely inspired by those at the Ritz hotel in London. Facilities on board included a gym, pool, Turkish bath, a kennel for first class dogs, and a squash court. It even had its own on board newspaper – the Atlantic Daily Bulletin.

The Grand Staircase on board descended down seven of the ship’s 10 decks and featured oak panelling, bronze cherubs and paintings. Replicas can be found at the Titanic Museum in Branson, Missouri.

The Titanic was built in Belfast, Ireland by ship builders Harland and Wolff.

The staircase at the White Swan Hotel in Alnwick, contains banisters from the Grand Staircase of the Titanic’s sister ship, the Olympic. They are presumed to have been identical.

The Titanic was equipped to carry 64 lifeboats but in order to save space only 20 were carried on the maiden voyage.

Only 16 wooden lifeboats and four collapsible boats were carried, enough to accommodate 1,178 people. That's only one-third of Titanic's total capacity, but more than legally required.

The lifeboats were not filled to capacity. The first lifeboat to leave the Titanic after its collision with the iceberg was only carrying 28 out of the possible 65 people it could have taken to safety.

There were 246 injuries and two deaths recorded during the ship’s 26-month construction in Belfast.

While there should have been a survival rate of 53.4%, given the number of lifeboats available, only 31.6% of passengers survived.

Twenty horses were required to carry the main anchor.

It took only 2 hours and 40 minutes to sink after hitting the iceberg.

The water temperature at the time was -2 degrees in centigrade.

22 tons of soap and tallow (rendered beef or mutton fat) were smeared on the slipway to assist its unhindered passage into the River Lagan.

Two dogs survived because their owners brought them onto lifeboats.

The ship made two stops after leaving Southampton – at Cherbourg in northern France, and Cobh (then Queenstown) in Ireland.

The Titanic carried 900 tonnes of freight and passengers' baggage.

The last supper served to first-class passengers consisted of 11 courses.

The Titanic had two anchors, each weighing 15 tonnes.

First-class passengers were given a music book containing 352 songs. Musicians on board were required to know them all, in case requests were made.

14 years before the Titanic sank a book was published titled Futility. The author was Morgan Robertson and it was a fictional novel about a ship called 'Titan', the largest ship ever built, that hit an iceberg and sank in April in the North Atlantic.

John Jacob Astor IV was the richest passenger on board, with a net worth of around $85m (approximately $2bn today), and went down with the ship. One legend claims that after the ship hit the iceberg he quipped to a waiter: “I asked for ice, but this is ridiculous”.

The most expensive ticket on the Titanic was a First Class Parlor ticket and it cost $4,350. This is equivalent to approximately $69,600 today.

Another notable victim was Benjamin Guggenheim, an American businessman. Realising that the ship was going down, he and his valet, Victor Giglio, reputedly changed into their evening wear while he remarked: “We've dressed up in our best and are prepared to go down like gentlemen.” They were last spotted on deck chairs drinking brandy and smoking cigars.

There were only two bathtubs available for the 700 third-class passengers aboard the Titanic.

Noel Leslie, the Countess of Rothes, was also on board, but survived. She is mentioned in an episode of Downton Abbey. “Isn't this terrible? When you think how excited Lucy Rothes was at the prospect,” remarks the Countess of Grantham when she hears of the disaster.

Two of the nine dogs on board were rescued – a Pomeranian and a Pekinese.

It took 74 years to locate the Titanic at the bottom of the sea.

The last remaining survivor of the disaster, Millvina Dean, died on May 31, 2009, aged 97. She was two months old at the time.