Facts About the Parthenon 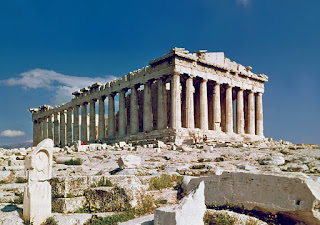 The Parthenon is a temple in Athens, Greece, that was built during the Athenian Empire rule in honor of the goddess Athena. Construction began in 447 BC and was completed in 438 BC however its decoration continued for 6 more years until 432 BC. There had been an earlier temple of Athena, now referred to as the Older Parthenon that was destroyed in 480 BC when the Persians invaded. The Parthenon that still exists today was built on the site of the Older Parthenon. In the 1460s the Ottomans invaded and the Parthenon became a mosque. On September 26th, 1687 the Venetians attacked the Ottomans and because the Ottomans had stored ammunition in the Parthenon, it ignited and was severely damaged. Efforts are ongoing to attempt to restore portions and preserve what remains.

The Parthenon is 45 feet tall, and its base is 228 feet by 101 feet. It sits on a hill called the Acropolis overlooking Athens.

Although the rectangular white marble Parthenon has suffered damage over the centuries, including the loss of most of its sculpture, its basic structure has remained intact.

The Greek goddess Athena was Athen's patron goddess. She was the goddess of wisdom, warfare, and courage.

The colonnade, consisting of 8 columns on the east and west and 17 on the north and south, encloses a walled interior rectangular chamber, or cella, originally divided into three aisles by two smaller Doric colonnades closed at the west end just behind the great cult statue.

The Parthenon is an example of Doric style, which is a simple style with a plainer column than other styles of architecture.

The only light came through the east doorway, except for some that might have filtered through the marble tiles in the roof and ceiling.

The designer of the Parthenon was Phidias, a famous scuplter, and the architects Callicrates and Ictinos supervised the construction work itself.

The east and west ends of the interior of the building are each faced by a portico of six columns.

The roof and the interior of the sanctuary were destroyed in the third century AD by fire. In the 4th century AD the roof was replaced.

In 435 AD, after 1000 years as a temple dedicated to Athena, Theodosius II closed all the pagan temples.

The Parthenon embodies an extraordinary number of architectural refinements, which combine to give a plastic, sculptural appearance to the building.

In the late 6th century AD the Parthenon was converted to a Christian Church.

The entire work is a marvel of composition and clarity, which was further enhanced by colour and bronze accessories.

In 1456 the Turkish Ottoman Empire invaded and by the end of the century the Parthenon was converted to a mosque.

The Parthenon remained essentially intact until the 5th century CE, when Phidias’s colossal statue was removed and the temple was transformed into a Christian church.

In 1687 when the Venetians attacked Athens, the Parthenon was severely damaged. The Ottoman's had been storing ammunition inside the temple and it suffered an explosion when a mortar hit.

By the 7th century, certain structural alterations in the inner portion had also been made.

The explosion in 1687 destroyed the Parthenon's roof, blew out the central portion of the building, destroyed many columns on all sides, and killed approximately 300 people.

The Turks seized the Acropolis in 1458, and two years later they adopted the Parthenon as a mosque, without material change except for the raising of a minaret at the southwest corner.

Greece gained control of Athens on 1832, and all evidence of the Ottomans on the Acropolis was destroyed.

During the bombardment of the Acropolis in 1687 by Venetians fighting the Turks, a powder magazine located in the temple blew up, destroying the centre of the building.

The first known photograph of the Parthenon was taken in October of 1839 and the mosque in the Parthenon still remained at that point.

In 1801–03 a large part of the sculpture that remained was removed, with Turkish permission, by the British nobleman Thomas Bruce, Lord Elgin, and sold in 1816 to the British Museum in London.

Thomas Bruce, the 7th Earl of Elgin, removed several sculptures from the Parthenon supposedly by permission from 1801 to 1803.

Other sculptures from the Parthenon are now in the Louvre Museum in Paris, in Copenhagen, and elsewhere, but many are still in Athens.

The sculptures removed from the Parthenon by Thomas Bruce in the 1800s were sold to the British Museum. They are known as the Elgin Marbles and Greek government has been attempting to have them returned since the 1980s. The British government has refused to return them thus far.

Some of the sculptures from the Parthenon are on display at the Louvre in Paris, France, and in Copenhagen, while the majority are in Athen's Acropolis Museum.

Some efforts in the 1900s resulted in further damage because marble cracked when rust from uncoated stabilizing pins expanded.

Restoration is underway to restore and preserve the Parthenon.