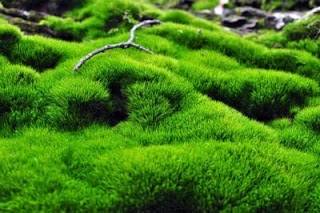 Mosses are group of fuzzy plants that belong to the division Bryophyta. There are around 12 000 species of moss that can be found throughout the world. Moss can survive in different habitats but it usually prefers shady areas of woodlands and forests that provide enough water. Moss can grow both on the trees and on the ground, but it can be also found on the rocks, under the water, on the clay…Even though mosses can adapt to various ecosystems, they are negatively affected by pollution and changes in environment that are result of increased human activity. These factors placed certain species of moss on the listed of endangered plants.

Moss was the first plant on earth. Algae adapted to life on earth evolving into lichen, liverworts and moss.

Mosses are tiny plants. Most mosses can reach 0.4 to 4 inches in height. Largest species are 20 inches tall.

Mosses live all over the world. There are over 10,000 species of moss worldwide.

Mosses tend to grow in moist places, but some species are drought tolerant and cold tolerant.

Unlike most other plants, mosses do not have vascular tissue (special kind of plant tissue that is used to transport water and nutrients through the plant). Because of that, mosses lack root, stem and flowers.

Mosses use structures called rhizoids (which look like miniature roots) to attach themselves to the ground.

Mosses are anchored to earth, rock, trees by rhizoids which look like tiny roots. The rhizoids are a thread like structure but don’t absorb water or nutrients.

Mosses produce energy (in the form of sugar) in the process of photosynthesis (production of food in the green part of the plant through absorption of sunlight and carbon dioxide).

Mosses were the first plants that managed to survive on the solid ground. They evolved from algae.

Mosses are able to absorb huge amount of water and prevent erosion of soil as a result of water runoff.

Mosses grow in a wider range of light exposures than other plants, from bright to dark.

Mosses were used as bandages during the First World War to prevent blood loss. Mosses were also used to soothe the infection since they contain chemical with anti-bacterial properties.

Mosses have been used over the centuries as pillow stuffing, wound dressing and diapers. It is not used as a human food to the best of my knowledge.

People used dried mosses for heating of the houses in the past. Live mosses were used to insulate boots in cold climates. Mosses are also very popular in gardening because they require low maintenance, tolerate periods of drought and visually improve beauty of the garden.

Mosses collectively provide more carbon offset than all the trees in the world.

Certain animals, such as reindeer, consume mosses because they contain chemical which warms the blood of animal.

Most animals don’t eat moss. It’s hard to digest, and it has little nutritional value.

Mosses are indicators of pollution. They can grow only in clean environments.

During the first World War, mosses were used as bandages. Moss has antiseptic properties, which was perfect to cleanse and heal the wounded over the course of the war.

Moss can stop its metabolism almost completely during the hot periods of the year when water is not available.

Earlier, mosses have even been used as diapers.

Mosses collectively provide more carbon offset than all the trees in the world.

Moss lives near the water because male and female reproductive cells travel to each other and merge in the water.

Lifespan of moss depends on the species. It ranges from couple to 10 years.