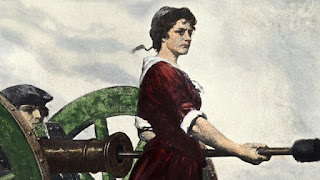 Molly Pitcher was born on October 13th, 1754 near Trenton, New Jersey. Her birth name was Mary Ludwig but she was given the nickname Molly Pitcher because she carried pitchers of water to soldiers during the Battle of Monmouth during the American Revolutionary War. It is also believed that when her husband William Hays collapsed during the battle, Mary took his place on the battlefield operating the canon. During the battle a cannonball shot by the enemy flew right between her legs and tore apart the bottom of the skirt she was wearing. She was unharmed. When the war ended, Mary gave birth to a son. William Hays died in 1786 and Mary later married John McCauley. This is why Mary's name is sometimes quoted as Mary Ludwig Hays McCauley.

There is no record of a real person named "Molly Pitcher" in Revolutionary war records.

During the Revolutionary period, many women named Mary were often nicknamed Molly.

Most historians agree it was a nickname for a person doing a particular job.

It is thought the name came from a soldier's cry for a pitcher of water to drink or to cool their overheated cannons.

Molly was a common woman's nickname at the time.

Molly's father was a butcher.

Molly Pitcher is as popular as ever and has found her way into grade-school and high-school textbooks.

Because education was not considered to be important for women at the time, it is unlikely that she attended school.

We are lucky that a certain Private Joseph Martin thought to record this detail in his journal later on, so the bravery of this woman was not lost to history.

William Hays, Molly's first husband, was a local barber. They were married on July 24th, 1769 and then settled in Carlisle, Pennsylvania.

Legend has it that she was thanked personally by General Washington.

After the war, her husband died and she remarried to John McCauley. He spent nearly all of her money and then disappeared. She died at 78.

Molly Pitcher joined a group of women led by Martha Washington. The group were known as camp followers and provided several services. They washed blankets and clothes and cared for the sick and the dying.

Others believe that “Molly Pitcher” is really Margaret Corbin, wife of John Corbin who was also an artilleryman in the Continental Army. Her story is very similar to that of Mary Ludwig Hays McCauley.

In 1778 William trained as an artilleryman and Molly and the other camp followers carried water to troops on the field.

There are other women, including Deborah Samson, who showed incredible bravery on the battlefield. The legend of “Molly Pitcher” could apply to them just as easily, which is why it is still unclear who Molly Pitcher was.

The water that Molly and the other women carried was used for drinking water by the soldiers and to cool down the cannon barrels. The water was also used to soak the ramrod sponge which was used to clean the barrel after each shot.

When the soldiers required water they would shout, "Molly - pitcher!" It is believed that this is how Molly got the name Molly Pitcher.

There are two springs in the battlefield today that are marked ‘Molly Pitcher Spring'. It is believed that the springs were the water source for Molly and the other women during the battle.

General Washington saw Molly during the battle and remembered her service. After it was over he issued her a warrant that named her a non-commissioned officer.

Following the battle and because of General Washington's commemoration of her courage she became known as ‘Sergeant Molly'.

She used this nickname for the rest of her life.

After William died Molly married again. Her second husband was not a nice man and he disappeared between 1807 and 1810, never to be seen again.

Molly supported herself by working as a general servant, and by caring for the sick and for children.

In 1822 Molly Pitcher was awarded a $40 annuity for her heroic service and bravery during the American Revolutionary War's Battle of Monmouth.

Molly Pitcher died on January 22nd, 1832 in Carlisle, Pennsylvania. She was 78 years old.
Share This