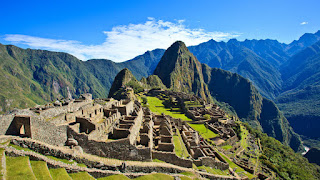 Machu Picchu is an Inca site in Peru that is thought to have been built as an estate for Pachacuti, an Incan emperor. It was built in the 15th century, approximately around 1450. It was abandoned as a place for Inca rulers in about 1572. It was discovered by the outside world in 1911and has since become a tourist attraction. By 1976 at least 30% of the site had been restored and those restoration efforts still continue today.

Machu Picchu is also known as the Lost City of the Incas.

Machu Picchu is made up of more than 150 buildings ranging from baths and houses to temples and sanctuaries.

It is located on the eastern Andes mountain slopes in a tropical mountain forest. There are terraces and walls that look as if they were cut from the rock.

The compound contains more than 100 separate flights of stairs. Most of the individual staircases were carved from one slab of stone.

Although many of the stones that were used to build the city were more than 50 pounds, it is believed that no wheels were used to transport these rocks up the mountain. Rather, it is thought that hundreds of men pushed the heavy rocks up the steep mountain side.

Yale Professor Hiram Bingham is thought to be one of the first non-Peruvians to lay eyes on the site in 1911. Even Peru's Spanish conquerors did not find it during the Spanish Conquest. This likely saved the Inca site from being destroyed.

Many different theories exist about Machu Picchu’s purpose—a royal estate and a secret ceremonial center among them.

It's thought that a German business man discovered Machu Picchu in 1867 and removed artifacts from the site. There are maps that show Machu Picchu dating back to 1874, which means that Hiram Bingham was not the first to see the magnificent site.

The Incas were some of the best masons in the world. The structures were so well built with a technique called ashlar (stones that are cut to fit together without mortar) that not even a knife blade can fit in between stones.

It was named a Peruvian Historical Sanctuary in 1981, and two years later, in 1983 UNESCO classified it as a World Heritage Site.

Machu Picchu was only known locally until Yale Professor Hiram Bingham re-discovered the site in 1911. His book, The Lost City of the Incas, was based on his findings.

Thanks to an internet pole in 2007, it was voted as one of the New Seven Wonders of the World.

A long-standing dispute between Peru and Yale University has existed over the artifacts collected by Bingham during his exploration of the site. Yale maintains that they own the items while Peru insists they were given on loan.

It is one of the most important historical Latin American sites and covers an area of 32,500 hectares.

Machu Picchu was an astronomical observatory, and its sacred Intihuatana stone accurately indicates the two equinoxes. Twice a year, the sun sits directly over the stone creating no shadow.

Unfortunately, most cities built by the Inca civilization were destroyed by the Spanish conquest. Machu Picchu was in a hidden location—invisible from below—and not found, making it one of the most well-preserved Inca cities and an archeological gem.

Machu Picchu is under threat from several different sources. These include too many tourists, and the fact that weather and earthquakes can make access difficult.

Due to its location high in the mountains, every day until roughly midday a blanket of mist covers Machu Picchu. This creates the feeling of floating amongst the clouds.

There is also an ongoing battle between Yale and the government of Peru. Due to Hiram Bingham's discovery of the site and removal of artifacts, the government and Yale are in a dispute over the artifacts themselves.

The granite rocks used to construct Machu Picchu were extremely heavy with some weighing over 55 tons.

To visit the site today it takes either a four day or two day journey by foot. It can also be reached by train that only takes a few hours.

Archaeologists have found evidence to suggest that the area where Machu Picchu was built has been used for agriculture dating back as far as 760 B.C.

One of the reasons Machu Picchu may have been abandoned is because of an outbreak of smallpox. This disease is thought to have been introduced to the Incas from travelers that visited the site prior to the Spanish Conquest.

According to historians and archaeologists, Machu Picchu was estimated to have a population between 300 and 1,000 people during the 1400’s.

In 2008 Machu Picchu was placed on the Watch List of the 100 Most Endangered Sites in the World by the World Monuments Fund. This was due to environmental degradation from tourism and development that has occurred in a nearby town. This town Aquas Calientes has built a bridge and a tram to make access to the site easier for tourists.

Some People believe that Machu Picchu had to be abandoned by the Incas because of an outbreak of smallpox.

There are three main structures located in the Sacred District of Machu Picchu. One is the Temple of the Three Windows which, along with the main temple are said to have the most impressive architecture in Machu Picchu. The second is the Temple of the Sun, a semi-circle shaped temple that at once time was thought to have gold and precious jewels inlaid in the door. The third, the Intiwatana, is a stone located on the top of a hill. Access is via 78 steps which lead to a platform.
It's believed that this stone was used as calendar or an astronomic clock.

To stop the structure from sliding down the side of the mountain the Inca people also built over 600 terraces.

In an effort to reduce the number of tourists to the site, there are now rules as to how many people can visit Machu Picchu in a day.

The Incas developed structured communication systems and trails connection Machu Picchu and other sites throughout the region which stretched over 18,000 miles long. This ranged from building bridges to paving mountain trails.