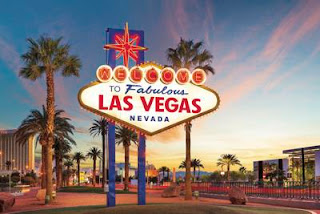 Las Vegas is a city in Nevada most well known as a city where gambling and nightlife. Las Vegas' official name is the City of Las Vegas, and it is the state of Nevada's most populated city. It is known as the Entertainment Capital of the World, with multiple casinos and hotels, and it is home to the world's largest mechanical neon sign (when it was erected) - a cowboy towering over Fremont Street. Of the 20 largest hotels in the United States, 17 of them are located in Las Vegas. Las Vegas is so bright that when it is viewed from space it is the brightest place on earth.

'Las Vegas' is Spanish for 'the meadows'.

Most of the 4.2-mile Las Vegas Strip (a drag that includes popular Las Vegas hotels like MGM Grand, Caesars Palace, and Wynn Las Vegas) is actually in the neighboring town of Paradise.

In 1844 John C. Freemont led pioneers to the area, and Freemont Street in Las Vegas is named after him.

A fort that was built in Las Vegas in 1855 called the Old Mormon Fort can still be seen at the intersection of Washington Avenue and Las Vegas Boulevard.

There are 149,213 Las Vegas hotel rooms, according to 2015 figures supplied by the Las Vegas Convention and Visitors Authority. The average nightly room rate was $120.

While most Las Vegas casino hotels will swap out competitors’ casino chips, this privilege is only honored in Nevada.

In 1931 gambling and casinos were legalized. The construction of Hoover Dam began nearby and the workers and their families helped to grow the city.

An icon on the Las Vegas Strip, the Luxor Light Beam at the Luxor Las Vegas is now operating at only half-strength from what it illumined in its 1993 debut.

Despite legalizing casino gaming in 1931, the sale of lottery tickets is still prohibited in the state of Nevada.

The first racially integrated hotel-casino in Las Vegas was opened in the 1950s, called the Moulin Rouge.

With earnings of $528 million in 2014, the highly profitable Wynn Las Vegas outpaces its competitors by offering a vast portfolio of the Strip’s most popular entertainment, including nightclubs, restaurants, shows, and, of course, gambling.

In 1965 nuclear testing began only 65 miles from Las Vegas.

In the 1960s it became popular for businesses and corporations to add casinos to their portfolios.

It’s estimated that more than a thousand people live underneath the city of Las Vegas.

Las Vegas has become so popular that more than 41 million people visit the city every year.

The oldest hotel in Las Vegas is the Golden Gate Hotel in Downtown Las Vegas, which opened in 1906.

It is estimated that approximately 34% of the thefts or cheating that goes on in casinos in Las Vegas are committed by the staff.

The first casino in Las Vegas received its gambling license in 1931.

There is a black book of names in Las Vegas of the people who are never allowed into a casino in Vegas.

The first Jerry Lewis/Muscular Dystrophy Telethon ever was broadcast from Las Vegas on Labor Day September 6, 1971.

The mobster Bugsy Siegel named The Flamingo casino after his girlfriend - a showgirl with very long legs.

At the Excalibur casino a 25 year old won $39 million after putting $100 into the slots.

There are an average 315 weddings per day in Las Vegas.

The average household in Las Vegas uses 222 gallons of water per household.

The sphinx at the Luxor is 101 feet taller than the original Great Sphinx of Giza.

The current number of licensed gambling places in Las Vegas 1,701.

More than 60,000 pounds of shrimp are consumed in Las Vegas every day.

There is estimated to be one slot machine in Las Vegas for every eight residents of the city.

The average visitor's gambling budget is $541 per trip.

Las Vegas' MGM Grand Hotel and Casino is the 2nd largest hotel in the world by number of rooms, and largest in the United States.

The Flamingo, built in the 1940s, was the anchor for the famous row of casinos on the Strip.

More than 300 weddings take place each day in Las Vegas.

There are 15,000 miles of neon tubing on the strip and throughout downtown Las Vegas.

There is an estimated 1000 homeless people living in the tunnels underneath the city of Las Vegas.

The official name of the Strip is Las Vegas Boulevard, but it used to be called the Arrowhead Highway, and then, the Sunset Strip.

There are approximately 310 days of sunshine each year in Las Vegas. Tornados are not an issue in this section of the Mojave desert basin.