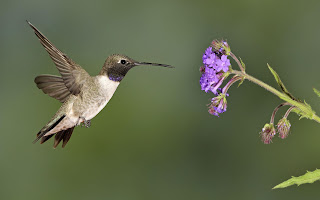 They don’t migrate in flocks like other species, and they typically travel alone for up to 500 miles at a time.

Most hummingbirds reach 3.3 inches in length and weigh between 0.07 and 0.7 ounces.

The name, hummingbird, comes from the humming noise their wings make as they beat so fast.

Hummingbirds have lower number of feathers compared to other birds (less than 1000), but they are known as "the flying jewels" because they are able to change the color of their feathers when they fly. This unique characteristic is the result of the iridescence coloring of the feathers and the influence of light, moisture and other factors.

Hummingbirds are the only birds that can fly backwards.

Hummingbirds are named after the humming sound which is produced by their wings during flight.

Hummingbirds have no sense of smell.

Hummingbirds are very intelligent animals. They have larger brain size (compared to the rest of the body) than other birds. Their brain weights 4.2% of the hummingbird total body weight.

The average weight of a hummingbird is less than a nickel.

Hummingbirds can remember which flower they have already visited and they know how much time each flower requires for nectar refilling.

Their tiny legs are only used for perching and moving sideways while perched. They can’t walk or hop.

Hummingbirds can see and hear better than humans. They can even detect ultraviolet light. They do not have the sense of smell.

Hummingbirds drink the nectar found in feeders by moving their tongue in and out about 13 times per second.

Hummingbirds use eyesight to locate the flowers. They prefer red flowers with a tubular shape. Hummingbirds have long beak which help them reach the bottom of the flower and forked (W shaped) tongue which is used for licking of the nectar inside it.

They can consume up to double their body weight in a day.

The average number of eggs laid by female hummingbirds is only two.

Hummingbirds use carbohydrates (sugars) as the main source of energy for flight. Nectar from flowers is the best source of sugar and hummingbirds drink it 5 to 8 times each hour. It spends 30 to 60 seconds in feeding. Hummingbird usually visits 1000 flowers per day.

Some species, like the Black-chinned Hummingbird make their nests with plant down, spider silk, and other natural resources that can expand as their babies grow after hatching.

Hummingbirds also eat insects, which provide them with enough proteins.

A flock of hummingbirds can be referred to as a bouquet, a glittering, a hover, a shimmer, or a tune.

There are over 330 species of hummingbirds in North and South America.

Each night hummingbirds enter hibernation-like state called torpor which helps them preserve the energy. Heart rate slows down, temperature drops and their metabolic rate decreases to 1/15 of the normal rate. They usually hang upside-down the tree during this phase.

Hummingbirds are native species of the New World and are not found outside of the Western Hemisphere except in a few zoos or aviaries.

Hummingbirds do not mate for life. They vocalize during the mating season. After mating, which lasts less than 4 seconds, female leaves the male and start preparing a nest for her eggs.

here are no hummingbirds found in Europe, Africa, Asia, Australia, or Antarctica.

A hummingbird’s brilliant throat color is not caused by feather pigmentation, but rather by iridescence in the arrangement of the feathers.

Most hummingbirds die in the first year of their life. Those that survive, have an average lifespan of 5 years in the wild and more than 10 years in captivity.

Hummingbirds have 1,000 to 1,500 feathers, the fewest number of feathers of any bird species in the world.

Roughly 25 to 30 percent of a hummingbird’s weight is in its pectoral muscles. These are the broad chest muscles principally responsible for flying.