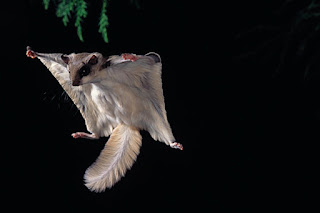 They sail from tree to tree on a special membrane between each front and back limb, a trick that has evolved multiple times in history.

Flying squirrel usually reaches 12 inches in length (including the tail) and weighs between 4 and 6.5 ounces.

They evolved big eyes to collect more light for better night vision, an adaptation shared by many nocturnal animals, from owls to lemurs.

Males and females look alike. Fur on their backs and sides is brown to grey, and white on the belly. Tail is flattened and large. It is used as a rudder when they glide through the air.

They can glow at night.

Although they are known as "flying squirrels", they do not actually fly - they glide through the air. Special type of the furry membrane (called patagia), stretched between wrists and ankles, serves as a parachute which supports squirrel while jumping from tree to tree.

Instead of wings, flying squirrels have 'patagia' and wrist spurs.

Flying squirrels can make 180 degree turns during gliding. Longest recorded "flight" was 300 feet, but they normally travel much shorter distances than that. They usually glide between 20 and 30 feet.

Flying squirrels use their thick paws as cushion for landing. When they land on the tree, they climb as high as possible to prepare themselves for another jump.

90 percent of all flying squirrel species exist only in Asia.

Only 3 flying squirrels are native to the New World.

Flying squirrels don't hibernate, but they do hygge.

Some flying squirrels are larger than a house cat.

Flying squirrels do not hibernate, but they slow down their activity during winter. Since the food sources are scarce at that time of the year, they survive mostly by eating food collected during the previous year. Flying squirrels can collect up 15 000 nuts per one season.

The woolly flying squirrel (Eupetaurus cinereus) is known only from about a dozen specimens in the far northern Himalayas, and is deemed endangered by the IUCN due to the clearing of its native pine forests.

Flying squirrels are highly social animals. They live in the holes in the trees, such as those made by woodpecker. A large group of squirrels can share a single hole. Squirrels conserve their energy through life in community.

Flying squirrels may share their dens with other animals such as bats and screech owls.

Mating occurs early in the spring and sometimes late in the summer. Flying squirrels usually produce one litter per year.

Babies are hairless and blind. Their ears are closed and toes are fused. Ears will open after 2 to 6 days. After 6 days, toes will separate from each other. Fur starts to grow after 7 days and their eyes finally open after 24 to 30 days.

Average lifespan of the flying squirrel in the wild is between 4 and 5 years and between 10 and 15 years in the captivity.
Share This