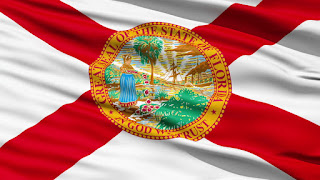 The State of Florida is located in the southeastern U.S. It shares the border with Alabama and Georgia. Florida is the fourth most populated of the 50 United States. Florida is mostly a peninsula with the Atlantic Ocean to its east and the Gulf of Mexico to its west. Spanish explorer Juan Ponce de Leon was the first European to land in Florida and he named the peninsula La Florida, which means flowery land. Following many years of struggle between European rule, Florida joined the Union in 1845. Florida has diverse cultural influences including Native American, European American, African American and Hispanic heritage.

It is believed that people first inhabited Florida approximately 12,000 years ago when they lived as hunters and gatherers.

Ocean and Gulf temperatures can reach well into the 80s during summer, and swimming is possible year-round in South Florida.

Juan Ponce de Leon is the first to have recorded evidence of discovering Florida. Some believe there may have been other Europeans before him but there is no proof.

Florida has the longest coastline (1,197 statute miles) in the contiguous United States, with 825 miles of accessible beaches to enjoy.

Florida was the 27th state to join the Union.

It’s the only state that borders both the Atlantic Ocean and the Gulf of Mexico.

Florida is known as the Sunshine State.

Wherever you are in Florida, you're never more than 60 miles from the nearest body of salt water.

The state’s highest natural point, Britton Hill, is only 345 feet above sea level -- the lowest high point of any state in America.

Key West is the southernmost point in the continental United States.

Florida has more than 9,200 miles of hiking, bicycling, equestrian and shared-use trails and over 4,000 miles of paddling trails.

The largest city in Florida is Jacksonville and the largest metro is Miami.

There are 67 counties in the State of Florida.

Florida has more than 1,200 golf courses, more than any other U.S. state. Appropriately, it is also home to the World Golf Hall of Fame and Museum, located in St. Augustine.

Florida accounts for approximately 67% of the oranges grown in the United States.

Florida is the boating and fishing capital of the world.

The oldest North American European settlement is Saint Augustine and is located in Florida.

Florida has more than 700 freshwater springs. Of them, 27 are classified as first-magnitude springs, more than any other state.

Many people believe Florida is the most southern U.S. state, but in fact Hawaii is more south.

The city of Fort Lauderdale is known as the Venice of America because of its canal system, with 165 miles of local waterways.

Florida has 663 miles of beaches.

The fishing village of Cedar Key is renowned for having the best clam chowder in America.

It is estimated that approximately 1000 people move to Florida every day.

Florida’s largest river, the St. Johns River, is one of only a few major rivers that flow from south to north.

Florida has 1,250 golf courses, which is more than any other U.S. state.

Cape Canaveral is located in Florida. This is the launching pad for many space flights.

Florida has not only alligators and crocodiles, but also panthers, sea turtles, manatees and dolphins -- and at least 516 species of birds.

Everglades National Park– a UNESCO World Heritage Site – is the only place on the planet where crocodiles and alligators co-exist.

Fort Lauderdale has 185 miles of waterways and is often referred to as the Venice of America.

Crystal River is the only place in North America where it is legal to have a supervised swim with wild manatees.

The sport fishing capital of the world is Islamorada, Florida.

The Great Florida Birding Trail is a statewide network of 510 wildlife viewing sites found along a flyway for migrating birds.

The dive capital of the world is Key Largo, Florida.

Severe weather is common in Florida. Central Florida experiences more lightning than anywhere else in the U.S.

Florida is the theme park epicenter of the world. All of the titans of family entertainment are here -- Disney, Universal, SeaWorld, LEGOLAND, Busch Gardens.

Florida experiences more tornadoes than the Midwest and Great Plains but they are usually not as intense.

Orlando attracts more visitors than any other amusement park destination in the United States.

Hurricane season runs from June 1st to November 30th, and Florida is the most hurricane-prone state.

Seven of the 10 most visited theme parks are in Florida.

Florida is home to a wide variety of marine mammals including the West Indian Manatee, the bottlenose dolphin and North Atlantic Right Whale.

Walt Disney World Resort, opened in 1971, is the planet’s most visited and biggest recreational resort.

It is estimated that there are approximately half a million feral pigs in Florida today.

Florida tops the list of the nation’s most popular water parks.