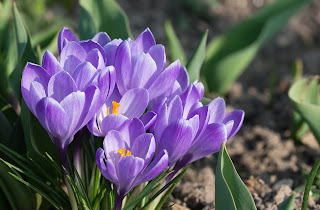 Crocus is a plant that belongs to iris family. There are over 80 different species of crocus that originate from Southern Europe, Central Asia, China, Middle East and Africa. Crocus lives in alpine meadows, rocky mountainsides, scrublands and woodlands. Crocuses tolerate low temperature and cold climates. Beautiful flowers of crocus often protrude from the snow when these plants live on the high altitudes. People started cultivating crocus 500 years BC. This plant can be used as spice, medicine and as a dye. Majority of crocus species are abundant in the wild. Certain species are threatened by habitat loss.

Their leaves and petals are covered by a waxy cuticle.

Crocus is small plant that can reach 8 to 12 inches in height.

Saffron is a product of the crocus.

Color of the flower depends on the species. Crocuses are usually yellow, white, mauve or lilac in color.

90% of the world’s saffron is harvested in Iran, and it’s one of the most expensive and precious spices on the planet.

Crocus has single, cup-shaped flower that arises from long tube. Flower is composed of six petals.

Crocus is at home in meadows, forests, and on mountain peaks.

Leaves of crocus have sword-like shape and white central stripe.

Crocus has corm which serves as underground storage system. Each year, at the beginning of the new growing season, new corm develops on the top of the old corm.

There are 80 different crocus species that originate in all different parts of the world.

The word “crocus” comes from the Greek word króki, which means weft, the thread used for weaving on a loom.

Saffron is a spice derived from dried female reproductive organs (red stigmas). These organs contain pigment called crocin which is yellow in color and has musky taste. Saffron is often used in Mediterranean kitchen.

It takes 85,000 flowers to accumulate just one kilogram of crocuses. And gathering must be done by hand, ideally between dawn and 10 a.m.

Saffron is the most expensive spice in the world because one ounce of saffron requires 80 000 plants. All plants are harvested manually. 90% of the world's saffron is produced in Iran.

Saffron based pigment was used in the cave art 50 000 years ago.

Crocus imperati has 7.5-10cm (3-4in) high flowers with buff outer petals streaked purple, and bright purple satiny inner petals. It is another early-flowering species appearing in mid to late winter.

Saffron can be used in the manufacture of perfumes and in medicine. Some studies showed that saffron has antibacterial properties and possible anti-tumor effects. It can improve memory and it is often used to alleviate cough, bronchitis and stomach ache.

Crocus medius has 7.5cm (3in) high, lightly scented lilac blooms with deep orange stigmas. It is one of the autumn-flowering species. Grow in a sunny spot.

Another application of saffron is in textile industry, where it is used for dyeing of fabrics.

Certain species of crocus, such as Crocus Autumnale are poisonous. Besides being dangerous (if consumed), this type of crocus shows the greatest tolerance toward low temperatures.

Different species of crocus bloom in different parts of the year, but most species will show their beautiful flowers during the winter and spring.

Crocuses can be pollinated by various types of insects, such as bees, moths and beetles.

Crocus is perennial plant which means that parts of the plant above the ground die each year and new plant develops from the underground corm. Crocus can survive more than two years.