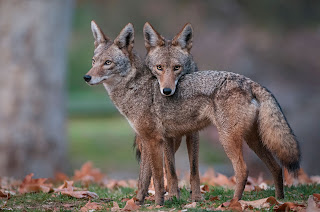 Coyote is a member of the canine (dog) family. Although it resembles wolf, these two are completely different species. Coyote can be found in the United States, Mexico and Canada. They inhabit different types of ecosystem, such as deserts, mountains and prairies. They can also be often found near the urban areas, around farms and the suburban areas of New York and New Jersey. Number of coyote in the wild is stable and they are not considered as endangered species. Coyote is also known as prairie wolf and bush wolf.

Known for howling at the moon, coyotes hunt at night and howl to communicate their location.

Coyotes are usually 32 to 37 inches long and have between 20 and 50 pounds. Their size is somewhere in between foxes and wolves.

They are also known for being "wily"; in fact, they are very smart creatures and have a heightened sense of hearing, smell and sight.

Color of the coyote's fur ranges from grayish brown to reddish brown. Fur on their belly is usually white. Color of their body helps them blend with their environment.

Coyotes are about as big as medium-size dogs, though they are smaller than wolves.

Coyote has pointed ears and muzzle and flat forehead. Another easily recognized feature is a long, bushy tail.

Coyotes are omnivores (eat both meat and vegetation). They will eat anything they find. Their favorite food include: rabbits, rodents (rats, mice, squirrels), antelopes, lizards, birds, cactus fruits, flowers. They will even eat dead animals (carcasses) and garbage if they cannot find anything else.

Coyotes live in North America and roam the plains, forests, mountains and deserts of Canada, the United States, Mexico and Central America. Some even live in tropical climates.

Hunting strategy depends on the type of prey they are chasing. If coyote hunt a small prey, it will hunt alone. If the prey of choice is larger animal, such as deer, group of coyotes (composed of several animals) will join their forces to kill the prey. Coyotes are the most active during the dawn and the dusk.

As humans take over more and more countryside, coyotes are adapting to living in cities to find food. In fact, it is becoming more and more common to see coyotes in big cities like New York and Los Angeles.

Coyote has incredible sense of hearing and smelling. It can localize a prey hiding under the snow using his ears.

Coyotes are solitary creatures and mark their territory with urine.

Coyote relies on its ears to avoid danger, also. It can detect hunters that are one mile away.

These hunters are nocturnal, meaning they sleep during the day and hunt at night.

Coyotes have special tactic to avoid predators and potential danger. They move silently by walking on the tips of their toes.

They eat small game such as rodents, rabbits, fish and frogs, and larger game like deer. Their diet is 90 percent mammalian.

In the spring, female coyotes build dens in preparation for their young.

Coyotes are excellent runners. They can achieve a speed of 40 miles per hours when chasing the prey. They are also excellent swimmers, which is especially important when they are trying to escape the danger.

Females have a gestation period of 63 days and give birth to groups of three to 12 young at once.

Coyotes produce wide variety of sounds for communication. They can howl, yelp, and produce high-pitched cries. They can also bark, growl, wail, and squeal. Communication allows coyote to keep track on its family members.

The groups of baby coyotes are called litters and each coyote baby is called a pup.

Coyotes are territorial animals. Just like dogs, they use urine to mark their territory.

The size of the litter depends on where the coyotes live. In areas where there are a lot of coyotes, there will be smaller litters. In areas with fewer coyotes, more pups will be born.

Mating season takes place in February. Pregnancy lasts 60 to 63 days and it ends with five to seven babies. Mother takes good care of her babies in the underground den or in a den made of bushes and trees. Urine marks are used as alert sign to keep other coyotes away from a den. If mother detects danger, she will move her cubs to a safer location.

Both the male and female participate in taking care of the pups. The male will bring food to the female and the pups and help protect them from predators.

Coyotes are monogamous (one couple mate for a lifetime).

Coyotes can also mate with dogs. The offspring are called "coydogs."

Average lifespan of the coyote in the wild is between 10 and 14 years. They can live up to 20 years in the captivity.