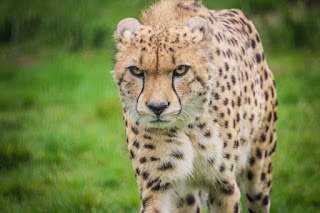 Cheetah is the type of wild cat, best known as the fastest animal on the planet. Cheetah lives in the grasslands, savannas and semi-arid area that have enough open space and plenty of prey. Biggest population of cheetah lives in Africa. Cheetahs can be also found in Asia. Both groups of cheetahs are endangered, especially Asian type (critically endangered) with only 250 remaining animals in the wild. Their number decreased significantly in the last twenty years due to habitat loss and poaching.

Fully grown cheetah has between 75 and 145 pounds, 4 feet in length and reaches 2 to 3 feet in height at the shoulder.

A cheetah can accelerate from 0 to 113 km in just a few seconds.

Their tail is usually 30 inches long.

Cheetahs are extremely fast however they tire quickly and can only keep up their top speed for a few minutes before they are too tired to continue.

Cheetah is easily recognized by its orange fur covered with black spots and two black lines called "black tears", which run from the inside of their eyes. Scientists believe that "black tears" prevent cheetah's eyes from a harsh African sun and help them see on the long distance.

Cheetahs are smaller than other members of the big cat family, weighing only 45 – 60 kilograms.

Cheetahs are diurnal (active during the day) animals. They choose the day because most animals in Africa hunt during the night, when the temperature drops down. Cheetahs are much weaker than other African cats and predators, which readily steal their food. Daily hunt minimizes the chances of losing the prey.

One way to always recognise a cheetah is by the long, black lines which run from the inside of each eye to the mouth. These are usually called “tear lines” and scientists believe they help protect the cheetah’s eyes from the harsh sun and help them to see long distances.

Cheetahs are the only big cat that cannot roar. They can purr though and usually purr most loudly when they are grooming or sitting near other cheetahs.

Cheetah drinks water every 3 to 4 days because it absorbs part of the water from the food.

While lions and leopards usually do their hunting at night, cheetahs hunt for food during the day.

Cheetah is the fastest runner on the planet. It runs 70 miles per hour, and achieves the speed from zero to 60 miles per hour in 3 seconds. It runs two times faster than the racing horse.

A cheetah has amazing eyesight during the day and can spot prey from 5 km away.

Although cheetah runs very fast, it cannot run for a very long time. After 400 to 600 yards, cheetah becomes exhausted and needs to take a rest. Fast running requires a lot of energy and it is especially hard when outer temperature is high. If cheetah catch an animal during the quick chase, it will take a rest (regain normal body temperature and slow down the breath) while it holds and suffocates the prey.

Cheetah's tail is essential during fast running, because it balances the animal and allows fast and sudden turns which happen often when the prey tries to escape.

With their light body weight and blunt claws, cheetahs are not well designed to protect themselves or their prey. When a larger or more aggressive animal approaches a cheetah in the wild, it will give up its catch to avoid a fight.

Unlike most other cats, cheetah is not a good tree climber. Also, it is the only cat which cannot roar.

Cheetahs only need to drink once every three to four days.

Cheetah is very vocal animal that can growl, hiss, snarl, moan, bleat and purr. They use facial expression to show their mood.

Usually only one brother from the group mates with females during the mating season.

Cheetahs usually mate during the dry season, resulting in pregnancy which lasts 3 months and ends at the beginning of the wet season (when the food sources are rich).

Female gives birth of 3 to 5 cubs weighing only five to ten ounces. They spend first weeks of their life in the den. This time is the most critical for their survival because mother needs to leave the cubs during the hunt. Cub mortality rate is very high - 90%.

5 to 6 weeks old cheetahs accompany their mother in hunt and stay with her until they reach 18 months.

Average lifespan of cheetah in the wild in 12 years and 17 years in captivity.
Share This