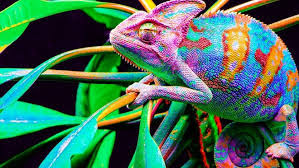 Chameleon is a type of lizard. There are around 160 species of chameleons which can be found mostly on the Madagascar (half of all species live there), in the Africa, southern Europe, south Asia and Sri Lanka. Some chameleon species are endangered due to habitat loss and destruction and because they are sold as pets.

Chameleons are a very unique branch of the lizard group of reptiles.

There are around 160 species of chameleon.

Chameleons prefer life in the forest and they adapted to the arboreal locomotion (movement in the trees). Their toes are divided in two groups of two or three toes on each foot, which help them grab the branch and achieve stability during walking. Chameleons move slowly, using one limb at the time.

Chameleons live in warm varied habitats from rainforests through to deserts.

Chameleons also use their long tail when moving in the trees to grab a branch and secure their position (to accomplish balance when necessary).

Almost half of the world's chameleon species are native to Madagascar, they are also found in Africa, and southern Europe to as far as Sri Lanka in Asia and have been introduced to Hawaii, California and Florida.

Chameleons have unique eyes, which can move separately from each other and achieve visual field of 180 degrees. This way chameleon can watch in two different directions at the same time and detect objects on the opposite sides. Eyes move rotationally and together provide visual field of 360 degrees.

Chameleons have very good eyesight and they are able to detect small insects that are 5 to 10 meters away. They are also able to detect ultraviolet light.

Chameleon change color for camouflage but this is not always the main reason. Some show darker colors when angry, or when trying to scare others. Males show light multi-colored patterns when vying for female attention. Desert varieties change to black when its cooler to absorb heat, then a light grey to reflect heat.

Chameleons do not have ear opening or outer ears, but they are not deaf. They can detect sounds in the frequency range from 200 to 600 Hz.

Chameleons have amazing eyes. The bulging upper and lower eyelids are joined and the pupil peaks out from a pinhole sized gap.

The best known characteristic of chameleons is their ability to change the color of the skin. Most people believe that chameleons change their color to blend in with environment. Actually, change in color is the result of the mood change (when they are angry or aggressive), temperature, light and moisture in their environment. Cells equipped with pigment used for color change are called chromatophores.

The chameleons' eyes can rotate and focus separately on 180-degree arcs, so they can see two different objects at the same time. This gives them a full 360-degree field of vision.

Another equally impressive feature of chameleons is their long and sticky tongue used for catching of insects. Their tongue can be 1.5 to 2 times longer than their body (excluding tail). Tongue expands on its end and turns into a suction cup after catching of the insect.

Chameleons actual eyesight is great they can see small insects 5-10 meters away. They can also see in both visible and ultraviolet light.

Chameleon's tongue is propelled by incredible speed: it takes 0.07 seconds for tongue to reach the victim.

Chameleons feed by ballistically projecting their tongues often over twice the length of their body to catch prey, forming a suction cup as it hits its target.

The chameleons tongue can reach its prey in just 0.07 split seconds, with the projectile acceleration reaching over 41 g's of force.

Males are females do not always look the same. Males usually have more "ornaments", such as horns, spikes and nasal-protrusions. They are used when male defends its territory.

Although chameleons are not social animals, they tend to stick together and even to mate more intensively when they are exposed to the ultraviolet light.

Chameleons are not deaf but they do not actually have ear openings.

Chameleon deposits eggs in the nests in the ground. Number of eggs depends on the species and it ranges from 6 to 24. Time for hatching also varies from 6 months to 2 years. Some species carry eggs in the womb until the hatching.

Many species of chameleon have horn-like bumps or crests on their heads.

Newly born chameleons look like a miniature version of an adult animal. They are capable for the independent life from the minute they are born.

Chameleon can survive more than 10 years in the captivity.