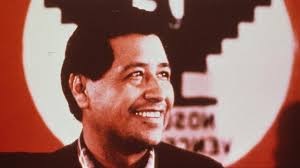 Cesar Chavez, the most well-known Latino American civil rights activist, was born on March 31st, 1927 in Yuma, Arizona. His parents were Juana Estrada and Librado Chavez. He had two brothers and two sisters and grew up on his family's farm in Yuma. His family also owned a local grocery store, but when Cesar was only 11 the family lost the farm because of the Great Depression. His family moved to California to find work, and they soon became migrant workers. Migrant work was hard and the family was barely paid enough to eat. This is how he learned about the unfair treatment of migrant workers. After two years in the navy he returned home, married, and a few years later after working on farms he got a job working for Latino's civil rights.

His middle name was Estrada.

Cesar Chavez had to quit grammar school to work in the farm fields full time in 1942.

Cesar was a vegetarian.

Cesar Chavez enlisted in the Navy in 1946. He served for two years.

After moving to California, his family lived in a poor barrio (town) called Sal Si Puedes which means "escape if you can".

In 1948 Cesar Chavez married his sweetheart Helen Favela. Together they would have eight children.

In 1952 Cesar Chavez began to work for the CSO (Community Service organization). While working at this job he began to work for Latino civil rights, spearheaded voter registrations and fought against economic and racial discrimination.

Cesar turned down a good job from President Kennedy to be a leader in the Peace Corps in order keep working on his union.

In 1958 Cesar Chavez became the CSOs executive director. The headquarters were moved to Los Angeles, California.

He was awarded the Presidential Medal of Freedom after his death.

His family owned a farm and a local grocery store.

Cesar had a happy time growing up with family and relatives around him.

The grape strike lasted five years. During the strike some grape companies agreed to a contract for farm workers.
In 1966 the NWFA and the AWOC merged into the UFW (United Farm Workers).

His best friend was his brother Richard.

In 1968 Cesar Chavez heads a boycott across the United States of table grape growers in California. It was known as ‘La Causa'. 17 million Americans supported the boycott.

His family lived in an adobe home built by his grandfather.

Robert Kennedy also supported the boycott, as did many civil and political rights leaders of the time.

When Cesar was around eleven years old, hard times from the Great Depression caused his father to lose the farm.

In 1970 the UFW signed a contract with most grape growers in California and the strike came to an end.

He worked in all sorts of different fields from grapes to beets.

In 1970, after the grape strike ended Cesar Chavez began a boycott against lettuce growers.

Moving so often, Cesar didn't go to school much any more. In just a few short years he had attended thirty-five different schools.

One time when he didn't speak English, a teacher made him wear a sign that read "I am a clown. I speak Spanish".

In 1972 the UFW organized another strike = this time against lettuce growers.

After graduating from the eighth grade, Cesar stopped going to school.

When Cesar was nineteen he joined the navy, but he left after two years and returned home to marry his sweetheart Helen Fabela in 1948.

In 1988, in order to bring attention to the dangers of pesticides to farm workers and their children, Cesar Chavez went on a 36 day hunger strike he called the ‘Fast for Life'.

He worked for the CSO for ten years helping register voters and work for equal rights.

Cesar read a lot and was influenced by a number of other leaders including Mohandas Gandhi and Dr. Martin Luther King, Jr.

In 1994 Cesar Chavez was awarded the Medal of Freedom by U.S. President Bill Clinton.

In order to bring attention to his cause Cesar fasted. This is when you don't eat. One time he fasted for 36 days. Many celebrities also fasted with him.

In 2000, a state holiday was established on March 31st, to celebrate Cesar Chavez in California.

Cesar Chavez' motto was ‘Yes, it can be done'.
Share This