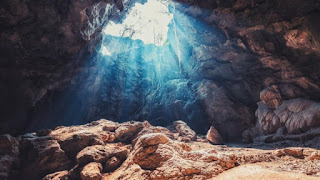 The term cave refers to a natural void that exists in the ground, which are formed by rocks that have weathered and left a space large enough for people or animals to enter. They can also include rock shelters, grottos, and sea caves. The study and exploration of caves is referred to as speleology. If a person explores or visits caves as a form of recreation this is referred to as spelunking, potholing, or caving. Speleogenesis refers to the development and formation of caves, which can take millions of years. Caves can be formed by erosion, tectonic action, pressure, atmospheric changes, microorganisms, and chemical processes.

Caves called lava tubes are formed when a volcano erupts and lava flows across Earth’s surface.

Caves cannot be longer than 9,800 feet as the overlying rock pressure will not allow it.

An active cave has water flowing through it while a relict cave does not.

Rock formations called speleothems decorate most caves. Speleothems can hang down from the ceiling, sprout up from the ground, or cover the sides of a cave.

Karst caves are the most common type, formed in limestone, chalk, dolomite, marble, gypsum or salt. The groundwater dissolves the rock with its natural acid over time.

Some animals like to hang out in the entrance of caves, but don’t truly live inside of caves.
These animals are called troglophiles, and they include mammals like foxes and bears, insects like spiders and cockroaches, and reptiles like salamanders and frogs.

If a cave is formed at the same time as the surrounding rock it is called a primary cave. The most common are lava tube caves.

The true cave dwellers are the troglobites. These are animals that live inside of caves and never go outside.

Caves found along the coast are called littoral or sea caves.

Bats aren’t actually troglobites because they only use caves for sleep and reproduction.

Caves formed by flowing streams that carry rock and other sediment are called erosional or corrasional caves.

Scientists who study caves are called speleologists, and they believe there are close to 50,000 different species of troglobites.

A cave formed by melting ice and its flowing water are called glacier caves.

A cave formed by boulders that have fallen down in a random heap is called a talus cave.

The maximum depth a cave can reach underground is about 9,800 feet (3,000 meters). Beyond this point, the pressure from the rocks would become too great, and the cave would collapse.

The deepest cave humans have discovered is the Voronya Cave in Georgia. It is 7,208 feet (2,197 meters) underground.

Caves have been used throughout human history as shelter, for burials, and as religious sites. Many archaeological treasures and ancient paintings have been found in caves around the world.

Bats commonly live in caves, including the gray bat and Mexican free-tailed bat.

A fracture cave is created by the dissolving of more soluble mineral rocks sitting between layers of less soluble rock, creating fracture collapses.

Primitives have used caves throughout history for shelter.

Glacier caves are formed as melting ice creates a flow of water within the glacier.

The early humans of South Africa used caves for dwellings as far back as 180,000 years ago. Pinnacle Point is the oldest known site.

Corrasional caves (or erosional caves) are formed by erosion as sediment laden streams flow through rock. These caves can form in any rock type including very hard granites. They usually require an initial fault or joint in the rock through which the water can flow.

The most common type of cave formation are solutional caves which are formed by natural acids in groundwater dissolving soluble rock such as limestone (or sometimes chalk, dolomite, marble or gypsum).

It is not possible for human eyes to adjust to the darkness in a cave because of the lack of any light.

There are roughly 14,000 known caves in the TAG area. The TAG area contains Tennessee, Georgia, and Alabama, which used to be shallow sea.

Caves can be dangerous because they are very prone to flooding. Caves are virtually water highways.

Some cave chambers are as big as entire cities.

Cave crystals can be as long as 39 feet.

People that want to live in caves can do so - and there are many homes around the world built in caves.

Mammals such as bears often use caves to hibernate during the winter months.