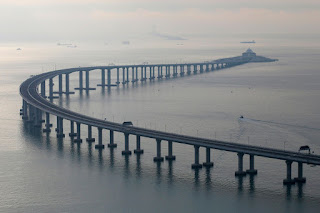 A bridge is a type of structure that is built to make it possible to connect or span two objects while leaving the area underneath open. A bridge is often built to allow transportation across two land masses without blocking something underneath such as a road, a valley or even river. There are many different bridge designs and the type chosen depends on the terrain underneath. The very first bridges were made of logs, and as technology advanced they were made with cut wood, stone, and eventually concrete, metal, and other materials. Some bridges are even moveable, double-decker, or are made for pedestrians only.

When a bridge is being designed there are several factors to consider including the weight it must hold, the weather it must endure, the terrain, the building materials to be used, and the cost.

The Kurilpa Bridge in Brisbane, Australia is one of the longest footbridges in the world. It’s also the largest hybrid tensegrity bridge, leveraging a synergy between balanced tension and compression components to create a light structure that is also incredibly strong.

A beam bridge is supported by one or more beams. An example of a beam bridge is southern Louisiana's Lake Pontchartrain Causeway bridge that spans 23.83 miles. It is the world's longest.

An amazing network of pedestrian bridges is suspended 120 feet over Telok Blangah Hill Park near Singapore.

A truss bridge is supported by a truss that bears the load of the bridge and everything that crosses it.

The Langkawi Sky Bridge was designed to give people a view of the Malaysian jungle.

An interesting two-lane bridge in Pavlovsky Posad, Russia was built in 2011. Traffic crosses it over the Vokhna River in one direction only.

An arch bridge has an abutment (substructure) at each end that takes the weight. The largest arch bridge is Chaotianmen Bridge in Chongqing, China, at 5,712 feet long.

The Half-Bridge of Hope in Russia is a wooden structure that looks like a bridge reaching from one hill to another. However, it serves no logical purpose. It simply exists as an art installation and engineering marvel.

A suspension bridge is suspended by cables hung from towers. The towers are deeply rooted into the ground or underwater floor by caissons or cofferdams.

The Peace Bridge is located on the east end of Lake Erie. The Bridge consists of five arched spans over the Niagara River and a Parker through-truss section over the Black Rock Canal on the American side of the river. The bridge is just over a mile long.

The Rainbow Bridge is an arch bridge over the Niagara River gorge that connects the cities of Niagara Falls, New York and Niagara Falls, Ontario. The bridge is not just a major border crossing, it’s also a popular tourist site because of the unique views it offers of Niagara Falls.

Footbridges are built for people to cross on foot. These usually do not cover very long spans, but make it possible to cross rivers, streams, roadways, or other gaps.

The world's oldest bridge still being used is the stone-segment arched Zhaozhou Bridge in China that was built in 605 A.D.
The Inca civilization in South America is known for the rope suspension bridges they built to enable crossing steep ravines and gorges in the jungle.

The Akashi Kaikyo Bridge in Kobe, Japan spans a distance of 6529 feet. When it opened for use in 1998 it became the longest suspension bridge in the world.

The busiest bridge is the George Washington Bridge that connects New Jersey's Bergen County to New York City. More than 102 million vehicles use it each year. It is a double decker bridge.

The ancient Romans constructed some of the most durable bridges ever. They built the Caravan Bridge, the world’s oldest reliably dated bridge.

The Siosepol Bridge in Esfahan, Iran was built during the Safavid dynasty between 1599 and 1602. It has 33 arches spanning 976.9 feet.

The Arkadiko Bridge is a Mycenaean bridge located on the Peloponnese in Greece. It dates back to the Greek Bronze Age and is one of the oldest arch bridges still in use. The structure is 72 feet long, 18 feet wide, and 13 feet high.

Sometimes bridges fail due to inadequate maintenance, poor design, structural failure due to unforeseen circumstances, or even earthquake or other natural disasters.

The Anji Bridge, built in 695 AD, is the oldest bridge in China. It’s known as the “safe crossing bridge” because it was carefully designed to be structurally sound.

The Golden Gate Bridge in San Francisco is 8981 feet long and incorporates 80,000 miles of cable. It is one of the most famous bridges in the world.

Back in September, the Beipanjiang Bridge, in mountainous southwestern China, was opened to traffic. It rises 1,854 feet above a river. That’s more than a third of a mile! It took the highest bridge record from the Si Du River Bridge in the central province of Hubei, also in China.