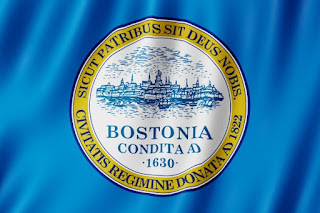 Boston is the capital city of the U.S. state of Massachusetts, located on Massachusetts Bay in the eastern part of the state. Boston has been the location of many important events in American history, including the Boston Tea Party, the Boston Massacre, the Battle of Bunker Hill, and the Siege of Boston. Boston's original name was Shawmut, a name given by the Native Americans to the area. Europeans named it Trimountaine but it was later changed to Boston, because of the location in England where several colonists originated - Boston, Lincolnshire, England. Boston covers an area of 89.6 square miles including land and water, and only 48.2 square miles when calculating land area only. The population of the city is approximately 655,884.

Many of the city’s first settlers came from Boston, England and simply kept the name.

Boston was first visited by explorers in 1614 when Captain John Smith sailed into Massachusetts Bay.

The first American lighthouse was built in Boston Harbor in 1716.

In its very early days Boston was called Trimountaine because of its three prominent hills, two of which have been destroyed by development.

Boston Common is stretch of green sanctuary within the city of Boston dates back to 1634. It’s the oldest public park in the United States and continues to welcome residents and tourists alike.

The first settler in Boston's area was William Blackstone, a reverend who arrived in 1623.

You won’t find any “Happy Hour” signs in the local Boston pub. The typical post-work drink deals have been banned since 1984.

A favorite American sweet snack for decades, the Fig Newton is actually named after the Boston suburb of Newton, Massachusetts.

The first public elementary school in America opened in 1635 - the Mather School.

Fenway Park is another American icon found in Boston. It’s Green Monster is so renowned, The Red Sox have actually patented the shade “Fenway Green.”

The first college established in North America was Harvard, in 1636, in Boston.

The very first chocolate factory in the United States was build in the Lower Mills section in the Dorchester neighborhood of Boston.

The first lighthouse built in America was built in 1716 in Boston Harbor.

In January 15, 1919, a storage tank holding more than 2 million gallons of molasses burst, sending a giant wave of the hot syrupy substance through the North End of Boston. It killed 21 people and several horses and injured more than 100 others, making it the worst molasses-related accident in history.

Boston was incorporated as a city in 1822.

The first chocolate factory in the U.S. was built in Boston, in the Lower Mills area of Dorchester.

The Boston University Bridge’s claim to fame is that it’s the only place anywhere in the world where a boat can sail under a train going under a vehicle driving under an airplane.

Boston became known as Beantown because of the popularity of baked beans in molasses in its early years.

The first public beach in the United States was Revere Beach in Boston.

Bostonians couldn’t celebrate Christmas between 1659-1681. It was against the law because the Pilgrims believed it to be a corrupted holiday.

The United States’ first public beach was Revere Beach in Boston (and now home to the International Sand Sculpting Festival).

At the first Boston Marathon there were only 15 participants. Today there are approximately 25,000 participants each year.

Between 1631 and 1890 the city of Boston was able to triple its land area. This was accomplished by filling in mud flats and marshes, and by filling in areas on the waterfront as well.

The biggest art theft to date occurred in Boston on March 18, 1990. Two thieves posing as cops stole 12 paintings worth a total of $100 million from the Isabella Stewart Gardner Museum.

In 1919 the Boston Molasses Disaster occurred. A tank carrying 2 million gallons of hot molasses burst and spilled onto Boston's north end. 21 people were killed, as well as many horses.

Each year on December 16th there is a re-enactment of the Boston Tea Party at Boston Harbor.

As of 2012 and according to U.S. Census Bureau data, 15.1% of Bostonians walked to work — the highest percentage among the major U.S. cities.

Boston is considered to be one of the world's top 30 economically powerful cities.

Boston Common is the oldest park in the United States. It is adjacent to Boston Public Garden. These parks are part of the Emerald Necklace - parks that were designed to encircle Boston, by Frederick Law Olmsted.