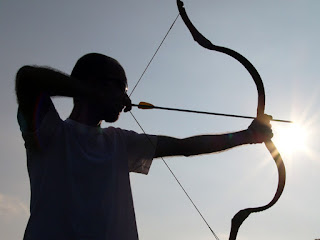 Archery is the practice of using a bow to propel an arrow through the air, with the intention of hitting a target. Throughout history the bow are arrow has been used as a method of hunting and as a weapon in combat. In recent times archery has become more commonly used as a competitive sport and for recreation. Many mythical heroes and figures were archers, such as Apollo, Cupid, Robin Hood and Wilhelm Tell. Archers even appear in many Chinese myths, African myths, as well as Greek, Roman and German myths. Today there are many types of bows, including compound bows, cable-backed bows, longbows and flatbows. Arrows can be made of wood, bamboo, fiberglass, aluminum, and composite materials. Archery is even a sport in the Summer Paralympic Games.

According to World Archery, the sport’s international governing body, when archery was introduced to the Olympics in 1900, archers competed in the popinjay competition. The object was to shoot a “bird” from atop a pole. The bird, however, was simply a plastic tube with feathers. Not a real bird.

The first known use of bows and arrows in combat was in 2340BC by the Babylonians.

According to the National Safety Council, archery is more than three times safer than golf, with just one injury for every 2,000 participants. USA Archery reports that the sport is even safer than bowling.

It is believed that bows and arrows have been used for at least 25,000 years based upon the discovery of arrowheads in Africa.

According to the Telegraph, an arrow released in competition flies 150 mph. The world’s fastest cheetah maxes out at about 60 mph.

Archery is considered to be one of the oldest sports in the world.

The innermost circle on an Olympic-style 10-ring target measures about 12.2 centimeters across.

The word archery is derived from the word arcus, a Latin term that means bow and arrows.

“Toxophilite” originates from Greek “toxon” for “bow and arrow” and “philos” for “loving.”

The first book published on the subject of archery was written by Roger Ascham in 1545 and its title was Toxophilus.

King Henry V ordered 500,000 arrows for his army in 1421. The arrows were stored in the Tower of London under the watchful eye of the appointed “keeper of the king’s arrows.”

Archery has been an Olympic sport almost from the beginning. Its debut in the summer Olympics occurred in 1900. In 1924 it was discontinued and it was reintroduced in 1972.

ARCHERY WAS THE FIRST OLYMPIC SPORT TO ALLOW FEMALE COMPETITORS.

In the 1900 Summer Olympics live pigeons were used as the target in archery competition.

Bhutan is the only country in the world where archery is the national sport. As Bhutan is a Buddhist nation, a bow and arrow would never be used for warfare, but the practice is still enjoyed as a sporting pursuit.

In the 1904 Olympics, archery was the only women's sport.

Archery was removed from the Olympic games during the 1920s on account of irregularity concerning the rules used and equipment available on an international scale. Fortunately, it was reintroduced in 1972 and is still a popular part of the games today.

Bhutan is the only country in the world that considers archery their national sport. Almost every village has its own archery range. Bhutan is a Buddhist nation so archery can only be used for play.

To date, South Korea holds the most Olympic gold medals for archery, with a current total of 23.

The Oscar winning actress Geena Davis participated in the US Women's Archery Championship in 1999. She came in 24th.

Archery is a sport beloved by British monarchs and nobility. Henry VIII had such a passion for the sport that, during his reign, men were obliged to practice their archery skills every Sunday after church.

Archery has been featured in many movies including Brave, The Hunger Games, Rambo, Robin Hood, and The Lord of the Rings.

Splitting your competitor’s arrow with another arrow is known in archery as a ‘Robin Hood,’ who is said to have performed this stunt himself.

The bag that archers use to hold their arrows is called a quiver.

Archery has featured in plenty of Hollywood blockbusters, including Lord of the Rings, The Hunger Games and Rambo. Hunger Games actress Jennifer Lawrence was trained by American Olympic archer Khatuna Lorig in preparation for her role as Katniss Everdeen.

Splitting the arrow of a competitor is called a 'Robin Hood', in reference to the legend archer Robin Hood who won a competition by splitting his opponent's arrow with his own.

To get within the ‘gold ring’, Olympic archers have to be able to hit a target the size of a beermat from a distance of seven bus lengths!

In most archer competitions, competitors must engrave their initials on their arrows.

The modern Olympic recurve bow may look hi-tech, but it is actually based on a design that originated over 3500 years ago (1500 BC)!

Kyudo is a traditional and ceremonial form of Japanese archery.

During the Middle Ages, a skilled long-bowman could release between 10-12 arrows per minute. That’s an arrow every five/six seconds!

In 1457 King James II banned golf in Scotland because he believed men were wasting time playing golf when they should have been practicing their archery skills.

Five-time US Olympic archery champion Khatuna Lorig trained Jennifer Lawrence for the Hunger Games films. She’s not the only Hollywood star to be adept with a bow. Thelma & Louise star Geena Davis just missed out on making the US Olympic archery team in 2000, placing 24th out of 300!

The very first compound bow was made 500 years ago.

Archery was the only sport that women could take part in, when they were first allowed to compete in the 1904 St. Louis Olympics.

In ancient Tahiti archery was a sacred sport that could only be played by those who were high-ranking.

One of England’s greatest victories was because of the skill of its long-bowmen. During the Battle of Crecy in 1346, they killed almost 2000 French knights and soldiers. The English lost just 50 men.

The first country with organized archery competitions was England in the 1500s.

During the reign of Henry VIII, every man in the country had to “Practice at the Butts” after church on Sundays to hone their archery skills.

Archers shoot according to their dominant eye and because of this a right-handed person may shoot with their left hand and vice versa.
Share This