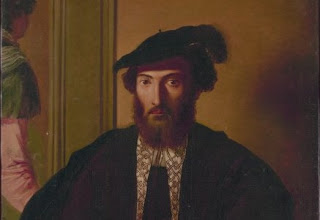 Amerigo Vespucci was born in Florence, Italy on March 9th, 1454. He was born to Ser Nastagio and Lisabetta Mini, friends of the Medici family who ruled Italy at the time. When in his early 20s Amerigo was sent on a diplomatic mission to Paris, and later had a banking business in Seville, Spain. He also later became a citizen of Spain (in 1505). While in his 40s Amerigo decided to become an explorer and left on his first voyage. Some believe he discovered the Americas before Christopher Columbus, due to a letter that is dated 1497. Historians are at odds as to who reached the Americas first. Despite the controversy, North and South America are named after Amerigo Vespucci.

Italian navigator Amerigo Vespucci was inspired by a conversation with Christopher Columbus to sail to the New World.

In 1492 Amerigo Vespucci helped to prepare Christopher Columbus' ships to sail to the New World.

Amerigo Vespucci demonstrated that the New World was not Asia but a previously unknown new continent.

According to the controversial letter dated May 10th, 1497, Amerigo Vespucci set sail on his first expedition with a fleet of Spanish ships.

He was born in Ognissanti, Florence, Italy.

Amerigo Vespucci's fleet reached South America in five weeks, and arrived back in Spain in October of 1498.

During his second expedition to South America (many believe was really his first), which began in May 1499, he discovered Cape St. Augustine and the Amazon River.

In 1483 he became steward in the powerful house of Lorenzo de Medici.

On May 14th, 1501 Amerigo Vespucci left on his third voyage to the Americas and it was on this trip that he discovered Rio de Janeiro and Rio de la Plata.

Whilst working for the Medici family he was sent to Seville in Spain where he learnt about the voyages of exploration and the search for a northwest passage to the lucrative Indies.

On his third trip Amerigo Vespucci took a route through the Sierra Leone and the Azores, and mistakenly believed that South America was a new continent and he called it the New World.

He stayed in Spain and in 1497 was granted permission to undertake a voyage of discovery by King Ferdinand of Spain.

On June 10th, 1503 Amerigo Vespucci set sail again, this time with the Portuguese flag. No new discoveries were made and he returned to Portugal in 1504.

His first voyage took him to the mainland of Guiana located on the northern Atlantic coast of South America.

America is the feminine version of the word Amerigas.

The Second Voyage of Amerigo Vespucci with Alonzo de Ojeda set sail for Cape Verde and explored the coast of Guiana and Brazil. They discovered Cape St. Augustine and the River Amazon and then returned to Spain

In 1507, a German cartographer named Martin Waldseemuler proposed the name America as a gesture to honor Amerigo Vespucci's contribution to discovering Brazil.

His Third Voyage took him back to Cape Verde and South America.

In 1538 another mapmaker named Mercator expanded the name America to include both northern and southern portions of the continent.

He established a trading agency for brazil wood at Cape Frio, Brazil - it was located exactly on the Tropic of Capricorn and returned to Europe.

Amerigo Vespucci married Maria Cerezo and on April 14, 1505 he became a naturalized Spaniard.

Amerigo Vespucci was the first person to determine that the New World was a new continent and not the West Indies.

Amerigo Vespucci named a few constellations on a voyage back from the New World in 1502. He named the Southern Cross, among others.

A coin was minted in Amerigo Vespucci's memory in 2012.

Very little evidence exists that Amerigo Vespucci made the voyage in question over the letter in 1497. However he was the first to suggest the world was much larger than thought, and the first to determine that the Americas were not the West Indies. He played an important part in America's history, as its namesake.