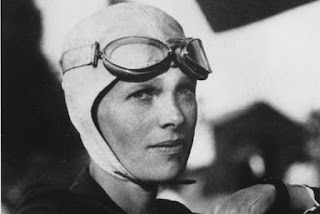 Amelia Mary Earhart, the first woman aviator to fly across the Atlantic Ocean solo, was born on July 24th, 1897. She was born in Atchison, Kansas, to Samuel Stanton Earhart, a German American, and Amelia Otis Earhart. She had an older sibling that died at birth and a younger sister named Grace Muriel Earhart. Amelia was homeschooled until she was twelve, at which time she started grade seven in public school. Amelia graduated from high school in 1916 and went on to junior college however she did not complete the program. She received nurse's aide training during World War I from the Red Cross and worked in Toronto, Ontario. In 1920 Amelia took a ride in an airplane and her future in aviation began.

After working with the Voluntary Aid Detachment in Toronto, Earhart took pre-med classes at Columbia University in 1919.

Amelia was named after her grandmothers Amelia Harres Otis and Mary Wells Earhart.

She took summer classes at Harvard, but gave up on higher education for good after she didn't get a scholarship to MIT.

Amelia's younger sister called her ‘Meelie' because she couldn't pronounce her name when she was young. The nickname stuck.

Neta Snook gave Earhart flying lessons at Kinner Field near Long Beach, California in 1921, reportedly charging $1 in Liberty Bonds for every minute they spent in the air.

Amelia was engaged to Sam Chapman but the relationship ended before they could get married.

Earhart's mom, Amy, used some of her inheritance to pay for The Canary.

Amelia's father Samuel (known as Edwin) was a lawyer who worked for the railroad.

Amelia and her sister liked to collect insects and frogs. Amelia was taught how to use a rifle that she often used to kill the rats in the family barn.

Earhart was a social worker at Denison House in Boston when she was invited to fly across the Atlantic for the first time (as a passenger) in 1928.

Amelia saw one of the Wright brothers fly an airplane when she was eleven years old at the Iowa State Fair.

At the height of her career, Earhart spent time making speeches, writing articles, and providing career counseling at Purdue University's Department of Aeronautics.

Amelia bought a leather jacket which was common for aviators. In order to make it look ‘not new' she slept in it for three nights.

Earhart was the sixteenth woman to get licensed by the Fédération Aéronautique Internationale (FAI), which was required to set flight records.

Earhart was the first person to ever fly solo from Honolulu to Oakland, Los Angeles to Mexico City, and Mexico City to Newark, all in 1935.

The flight on June 17th, 1928 cemented Amelia Earhart's place in history as the first female to fly across the Atlantic Ocean.

In 1931 Amelia married George Putnam, a book publisher. They met because he was looking for a female pilot to make the flight across the Atlantic on behalf of Mrs. Frederick Guest of London, England.

In 2014, another pilot named Amelia Earhart took to the skies to set a world record. The then-31-year-old California native became the youngest woman to fly 24,300 miles around the world in a single-engine plane. Her namesake never completed the journey, but the younger Earhart landed safely in Oakland on July 11, 2014.

Amelia Earhart wanted to fly solo across the Atlantic Ocean. She left May 20th, 1932 from Harbour Grace, Newfoundland, Canada. Her plane was a single-engine red Lockheed Vega.

On Amelia's first solo flight across the Atlantic Ocean she intended to fly to Paris France. Weather was bad and she cut the flight short, landing in Londonderry, Northern Ireland in a cow pasture.

Amelia became the first female to make the solo trip and she was also the second person in history, after Charles Lindbergh, to make the trip solo.

Amelia was the first person to fly solo from Hawaii to California.

Amelia was the first woman to receive from Congress the Distinguished Flying Cross.

Amelia was the first person to fly solo from Los Angeles to Mexico City in 1935.

Amelia continued to make historic flights until July 22nd, 1937. On that date she took off with Fred Noonan, her navigator, from New Guinea. Their destination was Howland Island in the Pacific Ocean. They were never seen again.