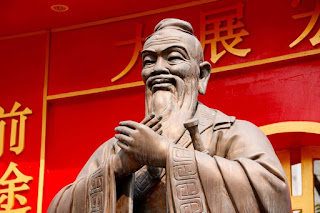 Confucianism is a type of religion based on ethics and philosophy developed by the Chinese philosopher Confucius, who lived from 551 to 478 BC. Confucius, also referred to as Master Kong or Kong Fuzi taught a system of philosophical, political, social and moral beliefs that went on to have a great influence on East Asia's history and culture. Confucius was born in Lu, in the Shantung Province, into poverty. His father died when he was very young and his mother began to teach him. After marrying Confucius had teachers of the six arts, and he himself began to teach when he was in his thirties. In his fifties he began to develop and teach his vision, which he did until his death at the age of 73.

Confucianism mainly addresses humanist concerns rather than things like God, revelation and the afterlife.

Confucius married when he was 19.

It emphasizes tradition, respect for the elderly, hierarchal social order and rule by a benevolent leader who is supposed to look out for the well being of his people.

Confucius worked as a stable manager and bookkeeper before he married.

Named after a Chinese sage named Confucius, it contains elements of ancestor worship, which is partly why it is sometime regarded as a religion.

The six arts that Confucius was schooled in were archery, music, arithmetic, calligraphy, charioteering and ritual. He also studied history and poetry.

The term Confucianism was coined by Westerners.

Confucius tried to bring his ideas about morals, politics, society, and education to the government but his ideas were not taken seriously.

In China, Confucians call themselves ju, a word of uncertain origin that refers to their beliefs as the “way of the sages” or “the way of the ancients."

Confucius left his country to find a feudal state that would accept his ideas.

According to Columbia University's Asia for Educators: “Confucianism is perhaps the most well-known of the textual traditions in China.

Confucius spent the next 12 years in exile, learning and teaching his vision.

The classical Confucian texts became key to the orthodox state ideology of the Chinese dynasties, and these texts, though they were mastered only by a scholarly elite, in fact penetrated society deeply.

When Confucius was 67 he returned home and taught and wrote.

Confucianism became strongly linked to the cosmic framework of traditional Chinese thought, as the Confucian ideals of ritual and social hierarchy came to be elaborated in terms of cosmic principles such as yin and yang.

Confucianism is mainly practiced in Vietnam, Korea, Japan and China, but it is also practiced in some places in North America.

Confucianism stresses harmony of relationships that are hierarchical yet provide benefits to both superior and inferior, a thought deemed useful and advantageous to Chinese authoritarian rulers of all times for its careful preservation of the class system.

Confucianism promotes the idea that people should live with moral virtue and honesty, while striving for ideal social relationships.

Kong Fuzi (Confucius in Latinized form) is honored in China as a great sage of antiquity whose writings promoted peace and harmony and good morals in family life and society in general.

Confucius was not the founder of Confucianism - he took outdated ideas and brought them back to life.

Confucianism is perhaps best understood as an all-encompassing humanism that is compatible with other forms of religion.

Confucianism teaches five virtues that dictate how a person should live and behave.

Confucianism has deeply influenced spiritual and political life in China; its influence has also extended to Korea, Japan, and Vietnam.

Confucianism's first virtue is Ren, which means 'humaneness', or 'benevolence'.

Confucianism's second virtue is Yi which means righteousness and honesty.

Confucianism's fourth virtue is Zhi which means knowledge or wisdom.

Confucianism's fifth virtue is Xin which means sincerity and fidelity.

Confucianism focuses on morality. Social harmony is its ultimate goal.

Confucianism has sacred texts including the Lun-yu (its most sacred scripture).

The Confucian Canon consists of the Five Classics and the Four Books.

In Confucianism the path to salvation is achieved through behavior leading to social equality rather than behavior based on punishment or reward after death.

Confucianism was mainstream in China until the 1900s when radicals determined that it was a major obstacle to China's modernization. It was repressed in the People's Republic of China's Cultural Revolution. However there are still followers of Confucianism today.