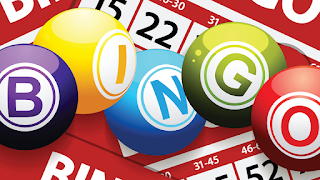 Bingo, or B-I-N-G-O is a game in which players are handed a Bingo card with numbers. As the Bingo caller draws numbers and calls them out, each player marks their card. When a player gets a full row they call out BINGO. There are a variety of ways to play and a variety of mediums used for cards, marking numbers, and prizes can include merchandise, cash, or any other item that players wish to compete for. There are Bingo halls that regularly host Bingo games, which can become a regular activity for people. To win at Bingo, most games require a single line, however these rules can be changed to include only one number or the player may need to cover their entire card to win.

Germans were the first to use Bingo cards in the 1800s as a type of educational tool to learn multiplication.

Carl Leffler was a mathematics professor who invented at least 6,000 Bingo card combination cards and is rumored to have gone insane afterwards.

In the U.K., Bingo cards are referred to as 'Housie'.

The fist bingo game was believed to happen in Italy as early as 1530 called “Lo Giuoco del Lotto D’Italia,” which is still being played until today.

Christine Bradfield, a grandmother from Bargoed in Caerphilly county is believed to be the largest bingo prize winner for winning more than £ 1.1M at The Castle Club in Merthyr Tydfil.

It is estimated that each week American Bingo players spend more than $90 million on their cards.

The largest recorded winning in online bingo is a whooping £430,900!

A Bingo player is considered to be ready/waiting/cased/set/down/ or chance if they only need one more number to win.

In a standard bingo card, a player can come up with 1,474,200 different winning combinations.

A person who calls BINGO before truly having won is referred to as 'jumping the gun'.

The bingo game was originally called “beano” but was later changed to “bingo” when an excited woman accidentally yelled the word after winning the jackpot.

If someone calls BING by accident this is referred to as a bongo, social error, or false alarm.

According to resources, 96% of regular bingo players have won the jackpot prize at least once.

If a person wins a line in Bingo without using the free space this is referred to as a hard way Bingo.

Statistics show that about 80% of bingo players are women while the remaining 20% constitutes the men population.

Winning the jackpot ranks fifth in the reasons why players join bingo games. It turned out that the top priority of bingo players is to find enjoyment.

People play Bingo more because they enjoy the game than they do to win. A poll found that winning was only 5th in importance for those who play Bingo regularly.

The bingo game has shown significant effects in improving a person’s cognitive abilities and has efficiently alleviated stress.

Bingo has been shown to keep a person's brain in shape. Bingo players are more agile mentally than those who do not play.

Bingo game is played by people of all ages. However, a wide spectrum of bingo players belongs to ages 35 and below.

Bingo is believed to have originated in Italy in 1530, when it was played as a Saturday lottery. It was referred to as "Il Giuoco del Lotto d'Italia".

The Bingo game was first called “beano” because bingo players used beans to mark the raffled numbers on their cards.

The French version of Bingo emerged in 1778 and was called Le Lotto.

The earliest known online bingo game was called “Bingo Zone” which was launched in 1996. It was followed by “Bingo Blitz” in 1998.

The game Keno evolved from Bingo.

Online bingo is a very popular leisure activity in UK gathering more than 3 Million players each day. Online bingo sites have contributed a lot in increasing the economy’s earnings for the past years.

Most people who play Bingo are 35 years of age or under.

Online bingo game in US has shown tremendous development and is now the most popular past-time activity among Americans.

A person by the name of Margaret has a higher chance of winning a Bingo game than someone with another name, statistically.

Online Bingo has accumulated a total of $640 Million in 2010 and about 50% of this earning came from UK alone.

83% of online bingo players are women and the remaining 17% are men.

Online Bingo players are mostly women, as they account for about 83% of those who play online.