Facts About The Wizard of Oz 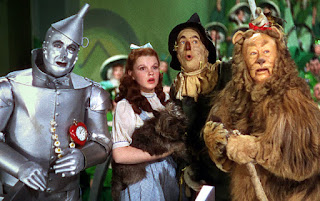 The Wizard of Oz is an American movie that was made in 1939 by Metro-Goldwyn-Mayer. It was adapted from the novel The Wonderful Wizard of Oz, written by L. Frank Baum in 1900. The Wizard of Oz was a musical, comedy, drama and fantasy that starred Judy Garland as Dorothy Gale, and Terry the dog as Toto. Other major characters included Glinda the Good Witch of the North, the Wicked Witch of the East, the Scarecrow, the Tin Man, and the Cowardly Lion. The film was noted for its use of Technicolor, a motion picture process that incorporated highly saturated color to create beautiful motion pictures. The Wizard of Oz was nominated for six Academy Awards and it won two of them.

Dorothy's blue-and-white gingham dress was blue and light pink, which was easier to shoot in Technicolor.

The script that was eventually used for the film The Wizard of Oz had gone through many rewrites and changes before it was given the green light. The final draft was completed on October 8th, 1938.

The famous sequined shoes were originally silver, like they are in the Oz books. But MGM studio head Louis B. Mayer wanted to show off Technicolor, so he changed the hue.

It is rumoured that the character of Dorothy was to be played by Shirley Temple at one point, and that Deanna Durbin was also considered, but Judy Garland was cast for the role.

The ruby red slippers that Judy Garland wore in the film were anonymously donated to the museum in 1979.

W. C. Fields was originally cast to play the Wizard, but after fee issues, the role went to Frank Morgan.

Judy Garland actually wore several pairs of shoes during filming. Another pair was on display in Grand Rapids, Minnesota, at a museum honoring the actress.

The Wicked Witch was originally to be played by Gale Sondergaard but she didn't want to be portrayed as an ugly witch so she left the role. Margaret Hamilton took on the role three days prior to the beginning of filming.

Buddy Ebsen, who would later on be known for hits like The Beverly Hillbillies, was originally cast as the Scarecrow, but he swapped roles with Ray Bolger.

Frank Morgan was as the Wizard but he also played Professor Marvel, the Doorman, the Cabbie, the Guard, and the Doctor.

The Scarecrow, and Hunk, was played by Ray Bolger.

Terry, the little female Cairn terrier that plays Toto, was paid $125 a week, though the dog's trainer always bemoaned not asking for more since the producers were desperate to cast Terry.

The Cowardly Lion, and Zeke, was played by Bert Lahr.

The Munchkins took home less than half of Toto's salary at $50 a week.

The Tim Man, and Hickory, was played by Jack Haley.

The gathering of little people on the set led to the formation of the Midgets of America advocacy group (now known as Little People of America), according to activist Billy Barty.

Most of the Wicked Witch's scenes had to be edited or cut completely after being deemed too terrifying for children.

Dorothy was 12 years old in the script, but Judy Garland was 16.

Morgan was also the Emerald City cabbie driving the Horse-of-a-Different-Color, a guard at the Wizard's palace, and the doorkeeper there.

The Wizard of Oz became one of its decade's highest grossing films, raking in $3 million and placing it third place. Gone With the Wind made millions more.

The stunning Billie Burke, who played Glinda the Good Witch of the North, was 54 years old at the time — 18 years older than her counterpart Margaret Hamilton, who portrayed the Wicked Witch of the West.

The scarecrow face prosthetics that Ray Bolger wore left a pattern of lines on his face that took more than a year to vanish.

Judy Garland won a special Academy Juvenile Award for her work in The Wizard of Oz and Babes in Arms.

A woman can be heard saying, ""wherefore art thou, Romeo?" in the scarecrow's song "If I Only Had A Heart." The woman who sang this was the voice of Snow White in Snow White and the Seven Dwarfs (1937), Adriana Caselotti. For her single line, she was paid $1,000.

The Wizard of Oz has been named on greatest movie lists by Rolling Stone, Entertainment Weekly, The Village Voice, Total Films, and many others.

When the 16-year-old, Judy Garland, was told she got the job, she was immediately ordered to lose 12 pounds.

Despite being the producer's favorite, many other actresses were considered for the role. These include Deanna Durbin, Bonita Granville, and a young Shirley Temple.

Judy Garland became very attached to Toto and asked to adopt the dog. But the owners did not agree to do it. Toto lived until 1945.

At the beginning of filming, Judy Garland was wearing a blonde wig and heavy "babydoll" makeup. This came to an end when George Cukor took over as director and insisted Judy showcase her natural looks.

The ruby red slippers used in The Wizard of Oz film were silver in the book The Wonderful Wizard of Oz.

As she's departing, Glinda the Good Witch gives Dorothy a kiss on the forehead. Though it's not explained in the movie, in the book her kiss offers protection to Dorothy, because "none dare harm someone who bears the kiss of the Good Witch."

Jack Haley, who played the Tin Man had a son that eventually married Judy Garland's daughter Liza Minnelli, in the 1970's.

The early Technicolor process required more light than a normal film production, which is not great for those in heavy costumes and stage makeup.