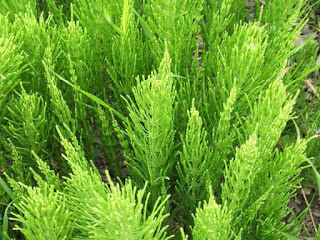 Horsetail is a vascular plant that is closely related with ferns. It is also known as snake grass and scouring rush. There are around 20 species of horsetail that can be found almost everywhere in the world, except in Australia, New Zealand, on several islands in the Pacific Ocean and on Antarctica. Horsetail prefers wet habitats, such as marshes, swamps and edges of the forest close to rivers and streams. It has high reproduction capacity and it easily conquers new habitats. Because of that, horsetail is often considered as weed. Population of horsetails is large and stable in the wild. These plants are not on the list of endangered species.

Horsetails are native to every continent except Antartica and Australasia.

Size of horsetail depends on the species. Majority of species are 1-2 feet tall. Largest species of horsetail can reach 6 feet in height.

Horsetails date back to the Palaeozoic era which lasted from 541 to 252 million years ago.

Horsetail has reduced leaves arranged in whorls along the branched stem.

Horsetails are related to ferns.

Stem is green in color and it plays role in photosynthesis (production of food by using sunlight and carbon dioxide).

Equisetum is the only remaining species of horesetail.

Stem of horsetail is coated with silica. This feature makes horsetail useful for polishing of metal surfaces.

Horsetail is attached to the ground via strong and very deep rhizome that gives rise to new stalks. Horsetail usually lives on wet sand and clay.

Horsetail does not have natural predators and it grows and spreads quickly. Because of that, it easily occupies new territories and acts as an invasive species.

Eating too many horsetails can kill horses.

Horsetail is not susceptible to viral or bacterial infections and it tolerates high doses of pesticides.

Horsetails evolved from plants that were 98 feet tall. Today’s horsetails are usually 1-2 feet although there is one in South America that grows to 32 feet.

Due to high dose of certain proteins (enzymes called thiaminase), animals (such as horses) can experience poisoning after consumption of large quantity of horsetail.

In many places, horsetails are considered invasive plants.

Horsetails can be used to scrub metal.

Even though horsetail is widely used for medical purposes, its positive effects are not scientifically proven.

Horsetails were used to treat a variety of ailments during the Greek and Roman days.

Horsetail originates from a group of tall plants (over 98 feet in height) that were one of the most dominant plants during the Paleozoic era.

Some people use it to stop bleeding, as a diuretic or an astringent.

Horsetail does not have flowers and does not produce seed. It reproduces via spores that are produced in the sporangium (cone shaped organ), located on the top of the plant.

Horsetails reproduce via spores rather than seeds.

Sporophyte generation consists of two different forms of horsetail: fertile and sterile. Fertile stem develops in spring and dies after releasing of spores. Sterile green stem develops from the rhizome during the summer.

Horsetail is perennial plant but each stage of its life cycle lasts shortly.