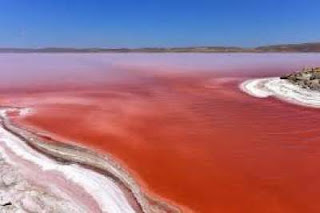 The Red Sea Rift lies underneath the Red Sea. This rift is part of the Great Rift Valley, a 3,700 mile long continuous geographic trench that stretches from Asia's Beqaa Valley to South East Africa's Mozambique.

Red Sea stretches towards the north to the city of Suez starting from the straits of Babl-Mendeb. It extends up to a distance of 1450 miles with a width of 205 miles. Average depth of Red Sea ranges from 2500-3500 feet with its deepest point located north of Straits of Tiran.

There are more than 1,000 invertebrate species in the Red Sea.

The Red Sea is also home to more than 200 hard and soft corals.

It is believed that the Red Sea's name may be referring to the red seasonal blooms of the Trichodesmium erythraeum.

Some theories suggest that the Red Sea got its name because some Asiatic languages referred to directions with colors.

The Red Sea is also referred to as the Erythraean Sea.

Ancient Egyptians are known to have explored the Red Sea while trying to create a trade route to Punt, as far back as 2500 BC.

The Red Sea was important to the spice trade as a transportation route during the Middle Ages.

The clownfish, Nemo, is found in the Red Sea reefs hidden in the tentacles of the colorful sea anemones.

Napoleon tried to gain control of the Red Sea in 1798 but failed to successfully invade Egypt and conquer the country.

For most part of the year, the climate of Red Sea is hot and dry. The temperature of the water is constant throughout the year with an average of 27°C in summer and 21°C in winter. January is the coolest month of the year with July and August being the warmest.

The Red Sea is located between semi-desert, desert, and arid land masses.

In the Egyptian Red Sea, there are about 17 major shipwrecks among which Thistlegorm and the Salem Express are famous. During the Second World War, Thistlegorm, an English warship, was destroyed by Germans and it sunk to the bottom of the sea.

The Red Sea exchanges its water with the Indian Ocean and the Arabian Sea through the Gulf of Aden.

The name ‘Red Sea’ is derived from the extensive growth of its resident blue algae, Trichodesmium erythraeum, which dyes the blue-green water and turns it orange-red. There are other explanations regarding the name as well. One such explanation states that during summer, the reflection of the setting sun casts a red appearance on the sea and hence the name. Another suggests that the name was derived from the colour of the corals found here.

Red Sea became a route for the shipping of goods in 1869 and soon gained popularity as an international trading route for the travellers coming from Europe.

Because of high evaporation rates the Red Sea is one of the world's saltiest seas. It reaches a level of 4.1% in its northern waters, while the average seawater salinity level is 3.5% (actual dissolved salt).

Towards the north, Red Sea is divided into Gulf of Aqaba and Gulf of Suez and joins the Mediterranean Sea through the manmade Suez Canal.

There are more than 1,200 fish species living in the Red Sea. Approximately 10% of these fish species can't be found elsewhere in the world.

Due to the pressure built by population and industries, the shoreline and the coastal regions of the Red Sea have become environmentally fragile.

There are many deep water fish found in the Red Sea including the glowbelly, blunt-tooth conger, blue lantern fish, naked barracuda, spotfin cardinal, and pink pipefish.

Located between Asia and Africa, the Red Sea covers nine countries and its waters provide vital recreation activities along with supporting the fishing industries of the zone. The northernmost point of this sea is the Sinai Peninsula which stretches over 1000 miles towards the south and joins Indian Ocean between Yemen and Ethiopia.

Red Sea, which is famous for its crystal clear water, was considered to be one of the world’s most tantalizing seascape environments however, now pollution seems to have taken control of its surroundings. Red Sea, also referred as Bahr al-Ahmar in Arabic, is geologically a recent opening and is rated among the youngest oceanic zones present on earth.

Interestingly, there are 25 islands in Red Sea, among which the most commonly known for diving purposes are Giftun Island, Gubal Island, Brothers Islands, Rocky Island, Tiran Island and Zabargad Island.

The Egyptian government has rules and regulations in place to protect the biodiversity of the Red Sea's coral reefs.
Some species living in the reefs of the Red Sea are dangerous to people including the tiger shark, scorpionfish, rabbitfish, and stingrays among many others.

Red Sea is home to several living creatures, coral formations and reefs. This sea consists of around 200 coral types, 1000 species of invertebrates, over 1000 species of fish. Hence, it attracts photographers, scientists and divers from across the world.