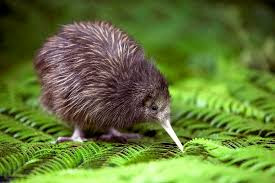 Kiwi is the smallest bird of the non-flying family of birds called ratites, which includes ostriches, emu, rheas and extinct Moa. Kiwis are endemic (live only there and nowhere else) for the New Zealand. They can be found in different types of habitats: scrubland, farmland, swamps, pine forest and vegetated gullies. There are 5 kiwi species. Little spotted kiwi and brown kiwi are endangered due to habitat loss, introduction of mammals, diseases, fires and predation.

Kiwi is a flightless bird, size as a chicken. It has 20 inches in height and weight up to 2.20 pounds. Females are bigger than males.

Very unusually, females have two ovaries, most birds have only one.

Kiwi has unique type of brown-grayish feathers that look like hair which hides vestigial wings that ends with cat-like claws. They also have long whiskers around the beak. Whiskers probably play tactile function.

It has marrow in its bones, just like a human.

Unlike other birds, kiwi has a long beak which ends with external nostrils. It has excellent sense of smell.

It has no tail feathers, but does have whiskers, like a cat.

Kiwi uses its beak to dig out the ground and find the food. During that process beak may collect substantial amount of dirt. Loud snuffling noises are produced when kiwi tries to remove the dirt from its nostrils. They can be heard during the night.

Its sense of smell is second to none.

It is the only bird in the world with nostrils at the end of its beak.

Kiwi has poor eyesight. It can see six feet in front of itself during the night and only two feet during the day.

It has loose feathers that are more like fur and unlike other birds the feathers moult throughout the year.

Kiwi is nocturnal bird (active during the night) relying completely on its sense of smell.

It has tiny wings, but cannot fly.

Kiwi is a unique-looking bird because it evolved in the highly isolated environment. It is very old bird that first appeared on Earth 8 million years ago and has not changed since that time. They are like living fossils.

The kiwi have one of the largest egg-to-body weight ratios of any bird. The egg averages 15% of the female's body weight (compared to 2% for the ostrich). Incubation is done by the male and can take anything from 74-90 days. When first hatched, the belly of the chick is swollen with yolk which will sustain them for their first few days. Female kiwi grow to be larger than males (up to 3.3 kg and 45 cm).

Unlike other birds, kiwi has a body temperature of 38 degrees of Celsius, which is two degrees less than other birds and two degrees higher than humans.

Kiwi are omnivorous and although worms form a major part of their diet, they will also readily eat woodlice, millipedes, centipedes, slugs, snails, spiders, insects, seeds, berries and plant material. Kiwi feed at night and probe into the ground with their bill up to a depth of 12cm.

Kiwi is territorial animal. It is famous for its bad temper and willingness to protect its land whenever it spots an intruder. Their territory may be 40 hectares large.

Big ear openings provide a very good sense of hearing and the long graceful whiskers and sensitive bill help it locate food in the soil and leaf litter. Kiwi chicks are instinctive feeders and are not taught by parent birds to forage for food.

Kiwi lives in the underground burrows. It uses its strong legs and beak to dig the ground.

Stoats, ferrets and weasels are the biggest threat to the survival of Kiwi, closely followed by cats and dogs – only 5% of all Kiwis hatched in the wild survive to adulthood. The feather patterns allow kiwi to protect themselves by disappearing into the dark and fading into the forest vegetation. When distressed a kiwi freezes, disguising itself from aerial predators.

Mating season starts in June and ends in March because great quantity of food is available during that period. Males reach sexual maturity with 18 months, and females when they reach 3 years. Kiwis mate for life.

The kiwi is often given away by the sound of its uniquely placed 'noisy' nostrils at the tip of its bill. As it walks it taps the ground with its bill, probing the soil and sniffing loudly.

Both ovaries of female kiwis are functional (other birds have only left ovary) and they lay huge eggs. One egg is sized as 20% of the female's body. When comparing egg to body ratio, kiwi produces bigger eggs than ostriches. In some species, male sits on the egg until it hatches.

Kiwi are long-lived, and depending on the species live for between 25 and 50 years.

Due to large egg inside her body, stomach of the female kiwi stretches so much that it touches the ground. After laying the egg, it takes 2.5 months to hatch. Female lays two to three eggs each year.

Kiwi lives up to 40 years in the wild and up to 30 years in captivity.