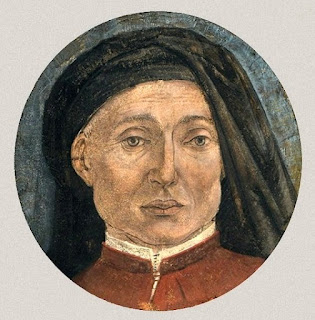 Alessio Baldovinetti was an Italian painter of the early Renaissance period. He was born on October 14th, 1425 in Florence to a rich merchant family. He was the oldest male child born to his parents, and although it was common for the oldest male child to follow in his father's career footpath, he chose instead to become an artist. He began to study at the painter's guild, Compagnia di San Luca, in 1448. His early work as an independent artist included the Chapel of the Annunciation in Santissima Annunziata's door paintings in 1449, and an altarpiece in 1450 for Mugello's Pieve di Borgo San Lorenzo. Alessio would go on to become an important Florentine artist influencing the next generation of painters.

Vasari tells us that Alessio was trained by Domenico Veneziano, who’s only slightly more recognized than his pupil.

Most of Baldovinetti’s work is documented and we even have a “Libro di Ricordi” in which he gives us details of kinds of colours he has purchased for commissions.

There is speculation that Alessio worked on the church S. Egidio along with Domenico Veneziano at some point between 1441 and 1451 but there is no definitive proof. It is known that Alessio was commissioned in 1460 to complete the work.

His favourite method was to paint a secco with a mixture of yolk of egg and varnish.

Alessio Baldovinetti was a great landscape artist as well, and he painted the fresco of the Annunziata basilica. He painted his landscapes as true to life as possible, in spacing and in natural detail.

He seems to have been an experimenter in the mould of Leonardo; his frescos like the great Florentine’s haven’t fared well over time.

Alessio Baldovinetti painted a Portrait of a Lady in Yellow in approximately 1465. In 1866 the painting was purchased by the National Gallery London, mistakenly attributed to Piero della Francesca as a portrait of Countess Palma of Urbino. It wasn't until 1911 that an art historian determined that the true artist had been Alessio Baldovinetti. The sitter of the portrait remains unknown.

Alessio Baldovinetti painted a Portrait of a Lady in Yellow in approximately 1465.

Alessio Baldovinetti was commissioned to work on a variety of important works for the church Sta Tiinit, which included an altarpiece of the Virgin and Child (1472), and Old Testament frescoes.

Baldovinetti came from a wealthy Florentine family. As well as painting on panel and in fresco, he worked in stained glass and mosaic.

Alessio Baldovinetti also worked as a mosaic artist, and worked at the church of S. Miniato between 1481 and 1483 to repair mosaics in and outside the cathedral.

Alessio Baldovinetti's works can be found today in galleries and museums around the world including at the Louvre in Paris, the National Gallery in London, the Courtauld Institute of Art in London, State Museums of Florence, and many more.

Baldovinetti joined the painters' guild, the Compagnia di San Luca of Florence, in 1448 or 1449. His work was also influenced by Fra Angelico and Andrea del Castagno.

His fresco of the Nativity in the cloister of the church of Santissima Annunziata in Florence is the best known of his four surviving paintings.

Alessio Baldovinetti created art on wood, canvas, and a variety of mediums including walls, and he also worked using the painting technique to create frescoes. To create a frescoe one would paint pigment on either wet or fresh plaster. When details are added later, when the plaster is dry, the painting technique is referred to as in secco.

Alessio Baldovinetti died on August 29th, 1499 in San Paolo and was buried in San Lorenzo.