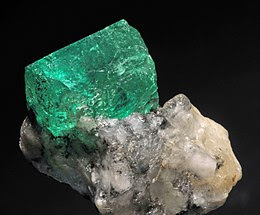 The word emerald is derived from the Greek word 'smaragdus' which means 'green gem'.

Emerald is one of the four recognized precious gemstones. The others are ruby, sapphire, and diamond.

The Duke of Devonshire Emerald is one of the largest uncut emeralds weighing 1,383.93 carats.

The emerald is the birthstone for the month of May.

An emerald pendant necklace owned by Elizabeth Taylor sold for $6.5 million in 2011, breaking down to about $280,000 paid per carat.

The emerald is often considered to be the gemstone for the Taurus, Gemini, and Cancer astrological signs.

A gemologist judges a diamond's clarity grade by using a 10x loupe. The clarity of an emerald is often assessed with the naked eye.

In the United States, a couple's 55th wedding anniversary is celebrated with an emerald gift.

Valuable, high-quality emeralds are very transparent and aren't too dark or too light. Green beryl that is too light in color may not even be considered emerald by some gemologists.

Emeralds often have many inclusions (imperfections) which makes them a weaker stone and more difficult to make into jewelry.

Because emeralds have a lower density, a 1 carat emerald is larger than a carat diamond.

The soft, calming color of the emerald helped early lapidaries rest their eyes after an extended period of concentration. Today, emerald is still thought to relax and relieve eye strain.

In order to help preserve an emerald and stop it from chipping or cracking they are often filled with a type of oil or with resin epoxy.

Emeralds were thought to guard against memory loss and enhance intuition.

Emeralds are made of beryl. This is also what makes the aquamarine gemstone, but emeralds get their color from small amounts of vanadium and chromium.

According to ancient folklore, putting an emerald under your tongue would help one see into the future.

There are emeralds believed to be 2.97 billion years old.

Synthetic sapphire and ruby were created in 1907, but synthetic emeralds were not created until 1935 when American chemist Carroll Chatham successfully grew his first 1-carat Chatham emerald. This stone is now on display at the Smithsonian Institute.

Cleopatra loved emeralds and they were considered to be one of her favorite stones.

Emeralds were first discovered in North America in the Yukon Territory in 1997, though large emerald deposits in the United States and further north are very rare.

Ancient folklore suggested that putting an emerald under your tongue would make it possible to see the future.

The Spanish traded emeralds across Europe and Asia for precious metals, which opened up the emerald trade to the rest of the world.

There is an emerald weighing 1,383.93 carats. It is called the Duke of Devonshire Emerald. It is an uncut emerald.

Emeralds were discovered in South America in the 16th century by the Spanish. They were used by the Incas well before this discovery.

In 1935 synthetic emeralds were created for the first time. Rubies and sapphires had been synthetically created since 1907.

One of Cleopatra's favorite stones was emerald, and her passion for the stone was well documented.

It can be difficult to tell the difference between a real emerald and a synthetic emerald, which makes it a commonly faked gemstone. They even put cracks in the fake ones to make them look real.

The first known emeralds were mined in Egypt around 1500 BC.

In 1997 emeralds were discovered in the Yukon Territory.

The oldest emeralds are about 2.97 billion years old.

Elizabeth Taylor once owned an emerald necklace that sold in 2011 for $6.5 million. It was more than 23 carats.

Colombia yields the largest amount of emeralds, contributing to more than 50 percent of all emerald production worldwide.

In the United States emeralds have been found in South Carolina, North Carolina, Nevada, Connecticut, and Montana.

Emerald measures between 7.5 to 8 on the Mohs Scale of Hardness. Though they are durable stones, emeralds are susceptible to chipping and cracking. This makes emeralds more expensive to set into jewelry due to the risk involved.

An emerald's value is determined by four main factors including carat weight, color, cut, and its clarity.

A 1-carat emerald appears larger than a 1-carat diamond because of its lower density.

An emerald's hardness is determined by the Mohs scale to be between 7.5 and 8. A diamond is 10 while turquoise is between 5 and 6.

Emerald gets its green coloring from trace amounts of chromium and/or vanadium.

Emeralds are thought to enhance love and commitment while also promoting healing.

Emerald is made from beryl just like the gemstone aquamarine.

Some of the most famous emeralds include the Chalk Emerald, Duke of Devonshire Emerald, Gachala Emerald, Mogul Mughal Emerald, Patricia Emerald, Bahia Emerald, and the Emerald of Saint Louis.

Emerald is the birthstone of May and is the traditional gift for the 20th, 35th and 55th wedding anniversary in the US.