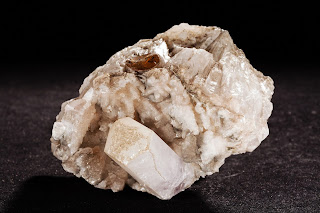 Calcite is a very abundant mineral found in the Earth's crust. It is found in sedimentary rock. Calcite contains carbon, calcium, and oxygen which are collectively known as calcium carbonate. It is usually mined from deep underground or quarried from the surface of the Earth.

Calcite comes in many different shapes and colors which makes it a popular choice among collectors.

Calcite is one of the most widely distributed minerals on the Earth's surface. It is a common constituent of sedimentary rocks, limestone in particular. It is also the primary mineral in metamorphic marble.

It is a chemical or biochemical calcium carbonate corresponding to the formula CaCO3 and belongs to the carbonate mineral. One can find it as a vein mineral in deposits from hot springs, and in caverns as stalactites and stalagmites.

Calcite is often the primary constituent of the shells of marine organisms, e.g., plankton, the hard parts of red algae, some sponges, brachiopoda, echinoderms, most bryozoa, and parts of the shells of some bivalves (such as oysters and rudists).

Although calcite can come in many dark colors, its streak is always white or light-colored.

Trilobites, which became extinct a quarter billion years ago, had unique compound eyes that used clear calcite crystals to form the lenses.

Limestone, which is used in chalk, is made of calcite.

Calcite is used in optical instruments because it has the ability to make objects appear doubled.

It is very common to find calcite in the shells of certain marine animals.

A distinctive characteristic of calcite is that it bubbles when exposed to a weak acid.

When large, underwater rocks containing calcite are exposed to acid, they dissolve and make caves.

Calcite can be found in various countries in the world including Mexico, the US, England, India, and Germany.

Calcite in the form of limestone is used to make dog food.

Sea organisms whose shells are made of calcite help balance the amount of CO2 in the ocean by absorbing it to make their calcite shells.

Calcite is an example of a fluorescent mineral in that it can emit light when connected to a non-visible UV light.

Calcite is also phosphorescent in that after being disconnected from a non-visible UV light, it still glows.

Calcite also emits light when it is heated much like steel.