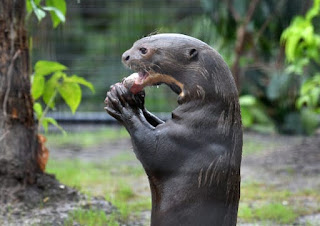 Giant otter belongs to a family of carnivorous mammals called mustelid. Giant otters are endemic (live only there and nowhere else) for the South America, and they can be found in the Orinoco, Amazon and La Plata River systems. They prefer slow-moving rivers, lakes, swamps and flooded forests during the rainy season. Number of giant otters dropped drastically in the last couple of years due to extensive hunting (their fur is highly valuable in the fashion industry) and because of river pollution (heavy metals such as mercury are highly poisonous for otters).

Giant otters have dense, velvety and thick brown fur which is water repellent (prevents water from reaching the skin).

Giant otters are the largest of any otter in the world growing up to 1.8m. They are double the size of world’s smallest otter, the Asian short-clawed otter.

Some specimens can be 6 feet long (like adult man), but due to small weight they have streamlined sleek look, which is perfectly adapted to the life in the water.

Giant otters live across the Amazon basin in South America.

Giant otters are excellent swimmers and divers thanks to their short, webbed feet and flattened tail. They swim 9 miles per hour and pass distance of 330 feet in 30 seconds.

Giant ottters are very sociable animals and often live in groups of up to 20 individuals.

Giant otter have small ears and nostrils which close each time they dive under water.

They have a gestation period of between 9-10 weeks and usually give birth to 1-3 cubs.

Giant otters spend most of the time in water because they feed mostly on fish and because they require large quantities of food: each animal eats 6-9 pounds of food per day.

Giant otters most common prey is fish but they have been known to take some of the more feared Amazonian animals such as caiman, anacondas and piranhas!

Small anacondas, caimans, crustaceans and other sea creatures are also on the giant otter's menu.

Giant otters are listed as Endangered on the IUCN Red List, and were last assessed in June 2014.

Giant otters have well developed sense of sight, used primarily for the hunting. Besides eyes, they use the whiskers to detect the prey in the water by identifying changes in the water pressure and current.

The species is threatened by habitat contamination and degradation, overfishing of their prey and conflicts with fishermen, infrastructure such as roads and hydroelectric dams, and climate change.

Giant otters do not store food. When they catch a prey, they will find a peaceful place ("picnic spot") to eat it.

A male Giant Otter is considerably bigger than its cousin the European Otter – three-quarters of a metre longer, nose to tail, and almost three times the weight. Giant Otters can reach 1.7 metres length and weigh over 30 kilograms.

Giant otters are very loud animals. They produce around 9 different types of sounds, such as quick barks, explosive snorts, wavering screams or low growls, to inform other otters about potential danger (alarm sound) or to send aggressive warning.

Jaguars, which inhabit the same territory as Giant Otters, are only slightly longer but they are much heavier.

Giant otters live in groups composed of 3 to 10 animals, formed by the monogamous couple (mother and father) and few generations of their offspring.

Giant Otters have thick, brown fur and a creamy-white pattern on their throats – a mark which is believed to be unique to each individual. Known in Spanish as the river wolf (Lobo Del Río), they are endemic to South America and occupy a variety of habitats such as lakes, swamps and slow-moving rivers throughout the Amazon River basin.

Giant otters mate throughout whole years, but most babies are born during the dry season. Pregnancy lasts 64 to 72 days, and female gives birth between one and six babies. They spend their first month in a den, which is usually located underground. All members of the group take care of the young.

During the rainy season, they also inhabit flooded tropical forests. The species can be found across the continent including Peru, Venezuela, Guyana, Brazil, Colombia and Ecuador, although their populations are not stable and are often sparse.

After two or three weeks after they are born, mother puts babies in the water where they learn to swim. In month or two, they become proficient swimmers and can hunt with the rest of their family. They stay within the family group usually until they reach sexual maturity, at age of 2.5 years.

They have strong eyesight and use their whiskers to detect changes in the water current.

Giant otters live 12 years in the wild and up to 21 years in captivity.

In 1973, national legislation was put in place that banned commercial hunting in Peru.