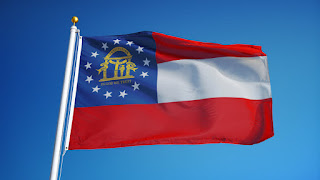 The State of Georgia, located in the southeastern U.S., was established in 1732. Georgia is named after King George II, of England. Georgia was one of seven of the original Confederate states. It is the 8th most populated of the 50 United States. It's most populated city is Atlanta, which is also Georgia's capital. Georgia shares state borders with Florida, South Carolina, Alabama, Tennessee and North Carolina. Georgia was admitted to the Union in 1788, making it the fourth state to join. Georgia has a wide variety of flora and fauna, and experiences a humid subtropical climate, spread throughout its varied terrain.

It is believed that Georgia was first traveled by the Spanish explorer Hernando de Soto in 1540.

Georgia's residents are referred to as Georgians.

Georgia experienced its own gold rush in 1829 when gold was discovered in the North Georgia Mountains.

Georgia's state song is 'Georgia on My Mind'.

The state motto for Georgia is Wisdom, Justice and Moderation.

Georgia's state insect is the honey bee. Its fish is the largemouth bass, and its tree is the live oak.

The second oldest city in America is Saint Mary's in Georgia.

The very first steamship to cross the Atlantic Ocean was 'The City of Savanna, which sailed from Georgia. Savanna is a city in Georgia.

Georgia is known for being the largest producer of peanuts, peaches and pecans in the United States.

The Vidalia onion, which is believed to be the sweetest onion in the world can only be grown in Georgia, in the ground around Glennville and Vidalia.

Coca Cola was invented in Georgia by Dr. John Pemberton in 1886.

The bloodiest battle in the U.S. took place in what is now called Chickamuga National Park.

The first college in the world that was chartered to grant degrees to women was Wesleyan College in Macon, Georgia.

Blackbeard Island was once home to the pirate Edward 'Blackbeard' Teach.

Georgia produces twice as many peanuts as the next leading state. From its vast stands of pine come more than half of the world's resins and turpentine and 74.4 percent of the U.S. supply. Georgia is a leader in the production of marble, kaolin, barite, and bauxite.

With Georgia's industry and economy, if it were an independent nation, it would rank as having the 28th largest economy in the world.

Georgia leads the nation in the production of paper and board, tufted textile products, and processed chicken. Other major manufactured products are transportation equipment, food products, apparel, and chemicals.

There are many U.S. military installations in Georgia, making it one of the states with the largest military presences in the U.S.

The largest state in the southeast, Georgia is typical of the changing South with an ever-increasing industrial development. Atlanta, largest city in the state, is the communications and transportation center for the Southeast and the area's chief distributor of goods.

The largest aquarium in the world is the Georgia Aquarium in Atlanta.

A Confederate stronghold, Georgia was the scene of extensive military action during the Civil War. Union general William T. Sherman burned Atlanta and destroyed a 60-mile-wide path to the coast, where he captured Savannah in 1864.

Gone with the Wind, a famous book and extremely famous movie, was based in Clayton County, Georgia. Its story took place during the American Civil War.

Hernando de Soto, the Spanish explorer, first traveled parts of Georgia in 1540. British claims later conflicted with those of Spain. After obtaining a royal charter, Gen. James Oglethorpe established the first permanent settlement in Georgia in 1733 as a refuge for English debtors. In 1742, Oglethorpe defeated Spanish invaders in the Battle of Bloody Marsh.

The TV show The Vampire Diaries is filmed in Georgia. Covington is the setting for Mystic Falls in the show.

The Dukes of Hazzard, a popular 70s TV show and later a movie, was set in Georgia. Hazzard County does not actually exist.

Georgia is sometimes called the Cracker State. Georgia is also known as the Peach State, and the Empire of the South.