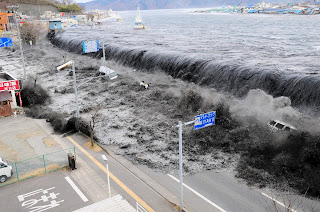 A tsunami occurs when a large volume of water is displaced, usually caused by an earthquake, volcano, or landslides, but they can also be caused by an underwater explosion, or from the impact of a meteorite. These disturbances can occur above or below water, causing extremely long waves, often resembling a tide that rises extremely fast. The large tsunamis can cause waves that reach over 100 feet in height and can travel at speeds of up to 500 miles per hour. The majority of tsunamis occur in the Pacific Ocean's Ring of Fire. When they occur, they can be extremely deadly to the people living in the coastal regions.

The first wave of a tsunami is usually not the strongest, successive waves get bigger and stronger.

Approximately 80% of tsunamis occur in the Pacific Ocean's Ring of Fire, where earthquakes and volcanoes are common.

The states in the U.S. at greatest risk for tsunamis are Hawaii, Alaska, Washington, Oregon, and California.

A tsunami can reach speeds of 500 miles per hour, which is almost the speed of a jet airplane.

If caught by a tsunami wave, it is better not to swim, but rather to grab a floating object and allow the current to carry you.

Because of their speed, a tsunami could cross the Pacific Ocean in only one day.

Tsunamis retain their energy, meaning they can travel across entire oceans with limited energy loss.

The long wave-length of a tsunami allows it to maintain its strength as it moves toward shore.

As a tsunami nears the shore, it slows down, but it gains more height and energy.

Scientists can accurately estimate the time when a tsunami will arrive almost anywhere around the world based on calculations using the depth of the water, distances from one place to another, and the time that the earthquake or other event occurred.

The top of a tsunami wave actually moves faster than the bottom. This is what causes them to rise so high.

Hawaii is always at great risk for a tsunami – they get about 1 per year and a severe one every 7 years. The biggest tsunami that occurred Hawaii happened in 1946, the coast of Hilo Island was hit with 30 ft waves at 500 mph.

Right before a tsunami hits shore, the coastal water is sucked away from the shore, which exposes the sea floor. This is a warning that the tsunami will hit within the next five minutes.

In 2004, the Indian Ocean tsunami was caused by an earthquake with the energy of 23,000 atomic bombs. After the earthquake, killer waves radiating from the epicenter slammed into the coastline of 11 countries. The final death toll was 283,000.

The first wave to hit shore is not usually the strongest wave. The waves that follow grow progressively larger and gain more strength.

Scientists have found traces of an asteroid-collision event that they say would have created a giant tsunami that swept around the Earth several times, inundating everything except the tallest mountains 3.5 billion years ago. The coastline of the continents was changed drastically and almost all life on land was exterminated.

In 426 BC, a Greek historian Thucydides wrote about tsunamis in his book History of the Peloponnesian War. He suggested that they were caused by earthquakes.

Scientists say that a great earthquake of magnitude 9 struck the Pacific Northwest in 1700 and created a tsunami that caused flooding and damage on the Pacific coast of Japan.

In the United States, Hawaii, Washington, Oregon and California are the states most at risk for a tsunami because of their location in relation to the Pacific Ocean's Ring of Fire.

Where the ocean is deep, tsunamis can travel unnoticed on the surface at speeds up to 500 miles an hour (800 kilometers an hour), crossing an ocean in a day or less. Scientists are able to calculate arrival times of tsunamis in different parts of the world based on their knowledge of water depths, distances, and when the event that generated them occurred.

Hawaii has a tsunami approximately every year however only one every seven years causes much damage.

Geological features such as reefs, bays, river entrances, and undersea formations may dissipate the energy of a tsunami. In some places a tsunami may cause the sea to rise vertically only a few inches or feet. In other places tsunamis have been known to surge vertically as high as 100 feet (30 meters). Most tsunamis cause the sea to rise no more than 10 feet (3 meters).

The largest tsunami in Hawaii's recorded history occurred in 1946, which killed 170 people.

Most tsunamis cause the sea to rise no more than 10 feet (3 meters). The Indian Ocean tsunami of December 2004 caused waves as high as 30 feet (9 meters) in some places, according to news reports. In other places witnesses described a rapid surging of the ocean.

In Japanese, tsunami means ‘harbor wave'. Japan has a long history of tsunamis.

Flooding can extend inland by a thousand feet (300 meters) or more. The enormous energy of a tsunami can lift giant boulders, flip vehicles, and demolish houses. Knowledge of the history of tsunamis in your area is a good indicator of what is likely to happen in a future tsunami event.

Many witnesses have said a tsunami sounds like a freight train.The 2004 Indian Ocean tsunami could rank as the most devastating on record. More than 200,000 people lost their lives, many of them washed out to sea.

The 2004 Indian Ocean tsunami is estimated to have had the energy equivalent to 23,000 atomic bombs.

The Caribbean has been hit by 37 verified tsunamis since 1498. Some were generated locally and others were the result of events far away, such as the earthquake near Portugal. The combined death toll from these Caribbean tsunamis is about 9,500.

The 2011 tsunami caused by the Tohoku earthquake off the east coast of Japan killed more than 15,000 people. This tsunami also caused a few nuclear accidents.

Large tsunami waves were generated in the Marmara Sea in Turkey after the Izmit earthquake of 1999.

Some people have referred to tsunamis as tidal waves but the reference has stopped being used because they have nothing to do with tides.

The Tsunami Warning System (TWS) in the Pacific, composed of 26 member countries, monitors seismological and tidal stations throughout the Pacific region. The system evaluates potentially tsunami-causing earthquakes and issues tsunami warnings. An international warning system for tsunamis in the Indian Ocean was launched in June 2006.

If a person is swept up in a tsunami, the best thing they can do is grab onto something that floats, not to try to swim.

Tsunamis can travel up rivers and streams that lead to the ocean.

Because of scientific research, it is now possible to determine the time when a tsunami will hit, based on the time of the tsunami-causing event (such as an earthquake), water-depth, and distance from one place to another.
Share This