Facts About Susan B. Anthony 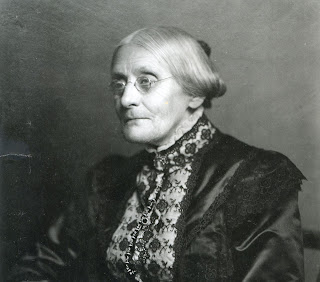 Susan B. Anthony was born on February 15th, 1820 into a Quaker family in Adams, Massachusetts that was committed to social equality. Her father was Daniel Anthony, an abolitionist and temperance advocate. Her mother was Lucy Reed, and although she herself was not a Quaker, she raised her children with Daniel in a less strict version of Quaker religious tradition. Throughout Susan's life she became known for her work as a women's rights advocate, abolitionist, and suffragist. By the time she was 17 she was already collecting anti-slavery petitions. Much of her life was spent speaking about equal rights around the country, collecting petitions and organizing women's rights and labor organizations.

Susan B. Anthony was the second of seven children in her family.

She attended public school until she was seven and the teacher refused to teach her long division. Her father then founded an educational program in her neighborhood where Susan and her siblings and other children were taught.

Susan taught at the school her father founded beginning in 1837, and various other schools in the early 1840s.

Susan B. Anthony’s Anthony ancestors came to America via England in 1634. The Anthonys had been a prominent and well-educated family. The English Anthonys were descended from a William Anthony in Germany who was an engraver. He served as Chief Engraver of the Royal Mint during the reigns of Edward VI, Mary I, and Elizabeth I.

Susan B. Anthony met Elizabeth Cady Stanton, credited with initiating the first women's suffrage and women's rights movements in America, in 1851. This was the beginning of a lifelong friendship and working relationship.

In 1856 Susan B. Anthony was appointed the New York state agent for American Anti-Slavery Society.

Her Maternal Grandfather Fought in the American Revolution.

Susan B. Anthony appeared every year from 1869 to 1906 (the year she died) before Congress, asking for the passage of a woman's suffrage amendment. The nineteenth amendment was finally passed in 1920, 14 years after Susan B. Anthony died.
The National American Woman Suffrage Association was formed in 1887, and Anthony and Stanton served as the first two presidents.

In 1856, Anthony began working as an agent for the American Anti-Slavery Society. She spent years promoting the society's cause up until the Civil War.

In 1942, a ship was named for Susan B. Anthony. Constructed in 1930 and called the Santa Clara until the Navy chartered it on August 7, 1942, the ship became one of very few named for a woman.

Susan B. Anthony was arrested in 1872 for voting - which was illegal for women at the time. She was convicted of the offence but never paid the fine.

Susan gave as many as 75 to 100 speeches each year in support of woman's suffrage.

She Celebrated Her 80th Birthday at the White House.

Susan B. Anthony and Elizabeth Cady Stanton started a newspaper called The Revolution in 1868. They ran it for 29 months and then transferred to a wealthy woman's rights activist when mounting debt threatened the paper's survival. The new owner published for less than two years after. Although the paper didn't last very long it helped to express important views.

The last time she spoke publicly she spoke the words 'failure is impossible', which are now famous.

In the early 1880s, Anthony published the first volume of History of Woman Suffrage — a project that she co-edited with Stanton, Ida Husted Harper and Matilda Joslin Gage. Several more volumes would follow.

The National Susan B. Anthony Museum and House is located in Rochester at her home. It is registered as a National Historic Landmark.