Facts about the Hoover Dam 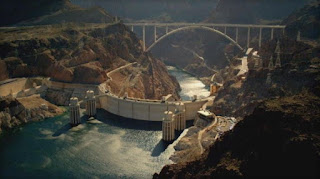 Hoover Dam is located on the border of Nevada and Arizona in the United States, in the Black Canyon of the Colorado River. It is an arch-gravity concrete dam that was once known as Bolder Dam. Hoover Dam was built during the Great Depression, beginning in 1931 and ending in 1936. The power generated from the dam helps support Nevada, California and Arizona. Hoover Dam is also a popular tourist attraction, drawing almost a million visitors every year.

The purpose of a dam is to contain the flow of water, and they are often used to help provide power.

Other reasons for dams include minimizing the risk of flood, irrigation, providing water for cities and towns, and also for creating recreational areas.

An entire city was created for people working on the dam.

Hoover Dam was dedicated by President Franklin D. Roosevelt in 1935.

The first man to die was J.G. Tierney. He was a US Bureau of Reclamation employee. He fell into the Colorado River on the December 20th, 1922 and died. On December 20th, 1935, Patrick Tierney, J.G. Tierney's son, fell from an intake tower and died. He was the last person to die during construction of Hoover Dam.

It once was the Earth’s tallest dam.

The idea to build the dam came about in approximately the year 1900. It wasn't until 1928 that the project was approved by Congress.

Six Companies won the bid to build the dam.

As Many As 138 Workers Died During Construction.

Construction began in 1931 and was finished in 1936. This was two years ahead of schedule.

Lake Mead is the name of the reservoir at Hoover Dam. It is the largest (by volume) reservoir in the United States.

Boulder City, Nevada was originally built for those who would be working on the dam.

The purpose of the Hoover Dam is for power, silt and flood control, irrigation, and water for both industrial and domestic use.

During World War II, the dam was the target of a German bomb plot.

Boulder Dam was renamed in 1947 to Hoover Dam, after President Herbert Hoover.

With the amount of concrete that was used to build Hoover Dam, a 4000 mile two-lane highway could have been built. It would be able to stretch from San Francisco to New York.

Hoover Dam has a power capacity of 1,345 megawatts. In one year it can create 4.2 billion KWh (kilowatt hours).

When Hoover Dam was built it cost $49 million. Today it would cost $811 million to build the same dam.

Las Vegas Bid To Be the Project’s Headquarters.

Hoover Dam is an arch-gravity dam. This means that it curves upstream, narrowing so that the majority of the water is then directed against the rock walls of the canyon. This provides force to compress the dam. This type of dam has both the characteristics of a gravity dam and an arch dam.

America’s second-highest bridge now reroutes traffic from the top of the dam.