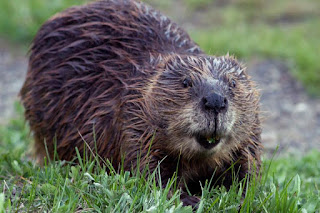 Beaver is one of the largest rodents in the world. There are two species of beavers: American and Eurasian. As their name implies, American beaver inhabits North America and Eurasian inhabits Europe and Asia. Both species prefer freshwater lakes, ponds, rivers, streams near the woodland area. Their population declined drastically in the 20th century due to extensive hunt and habitat loss. Number of beavers dropped from 60 million to 6-12 million animals after European immigrants colonized North America. These amazing animals are one of the few species able to redesign their environment and adjust it to their needs, by forming dam, canals and lodges.

Beavers are the second largest rodent in the world after the capybara.

Long and flat tail is one foot long. It is used for swimming and communication.

The beaver is mainly a nocturnal animal.

By slapping the water surface with tail, beaver alerts other members of the group about potential danger.

The large front teeth of the beaver never stop growing. The beavers constant gnawing on wood helps to keep their teeth from growing too long.

Beavers are semi-aquatic species, which means that they spend part of their life in the water and part on the ground. Their body is designed for both life styles (water and the ground). Waterproof fur prevents beavers from freezing in the water; their webbed feet serve as fins and flat tail as paddle, which all together provides efficient moving through the water.

Together beaver colonies create dams of wood and mud to provide still, deep water in order to protect against predators such as wolves, coyotes, bears or eagles, and also so they can float food and building material to their homes.

Beavers can swim 5 miles per hour and spend 15 minutes under water without returning back to the surface for the air.

Once the dams are completed and ponds formed, beavers will work on building their homes called lodges in the middle. The dome shaped lodges, like the dams, are constructed with branches and mud. Lodges have underwater entrances, making entry tough for most other animals.

Beavers have transparent eyelids which function as goggles which help them see under the water.

There are usually two dens within the lodge, one is for drying off after entering from the water and another, drier one, is where the family of up to four adults and six to eight young live.

Beavers are nocturnal animals - they hunt and work during the night.

There were once more than 60 million North American beaver. But due to hunting for its fur, its glands for medicine and because the beavers tree-felling and dams affect other land uses, the population has declined to around 12 million.

Beavers are herbivores animals. They like to eat tree bark of different plant species, like cherry, maple, aspen… They also eat plants like water lily, pond weed and different types of leaves. By pruning the bark of the wooden plants, beavers stimulate grow of plants.

The beaver has a good sense of hearing, smell, and touch. It has poor eyesight, but does have a set of transparent eyelids which allow them to see under water.

Beavers live in large groups called colonies. They consist of the parenting couple and few generations of their offspring.

Using their broad, scaly tail, beavers will forcefully slap the water as an alarm signal to other beavers in the area that a predator is approaching.

Beavers are monogamous, which means that male and female mate for a lifetime.

Beavers are slow on land but using their webbed feet, they are very good swimmers. A beaver can stay under water for up to 15 minutes.

Beaver homes are called lodges and they are made from mud and branches. Lodges are positioned in the middle of the pond, with hidden entrance (from the water), which prevents predators to get in touch with them.

Beavers are herbivores. They like to eat the wood of trees such as the aspen, cottonwood, willow, birch, maple, cherry and also eat pondweed and water lilies.

Dams are another construction masterpiece of beavers. They use dams to protect themselves from predators (such as coyote, wolves, bear), to keep the entrance of the lodge and to store food under the water. Water flowing downstream the dam is cleaner, which makes them beneficial for humans also.

Adult beavers are around 3 feet long and have been known to weigh over 25 kg (55 lb). Females are as large or larger than males of the same age.

Beavers are territorial animals. They use musk oil to cover the branches and mud in the dams to mark their territory.

The beaver is the national animal of Canada, and features on the Canadian five-cent piece.

Beavers have poor eyesight, but excellent sense of smell and hearing.

Beavers mate during January and February. Each year, female gives birth to (usually) two babies, called kits. They spend their first month of life in the lodges. Young beavers stay with their parents for 2 years and help them maintain the dam and lodges.

Beavers like to keep themselves busy, they are prolific builders during the night. Hence the saying "As busy as a beaver".

Beavers live 16 to 24 years in the wild.
Share This