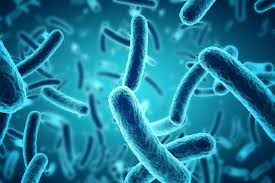 Tiny, one-celled creatures, bacteria have been around for millions of years, even longer than humans. They get nutrients directly from their environment in order to live. Some bacteria humans need in order to get nutrients into the body; these normally live in the intestine. Other bacteria reproduce inside the body and cause different infections - sore throats, ear infections, cavities, and pneumonia, among others. Other bacteria are used in labs to make things like medicine and vaccines.

All of the bacteria in our body collectively weighs about 4 pounds.

Bacteria are alive! They are the simplest form of life known, being made up of only one cell. They occur everywhere - bread, yogurt, dirt, and inside of humans!

The average office desk has 400 times more bacteria than a toilet.

There're more bacteria in your mouth than there are people in the world.

Some bacteria live on the inside of animals like cows. These bacteria allow cows (and other animals that eat grass) to digest the material the grass is made of, called cellulose. Humans don't have the right bacteria, and so we can't eat grass!

The "smell of rain" is caused by a bacteria called actinomycetes.

These bacteria can make people sick, can cause skin infections, and are generally very bad for people.

There are medications that can kill bacteria, which are called antibiotics. Most sickness (sore throats, runny nose, upset stomach) are caused by viruses, which antibiotics won't do anything against. If the doctor decides an illness is caused by bacteria, antibiotics can make the illness shorter, and not as bad.

Sweat itself is odorless. It's the bacteria on the skin that mingles with it and produces body odor.

The absolute best way to protect against getting sick with bacteria is washing hands, especially after using the restroom.

Bacteria can even live in food. Properly cooking food is a great way to kill off any bacteria that can live in it. Eating food that isn't cooked well enough can make people really sick.

Chocolate has an anti-bacterial effect on the mouth and protects against tooth decay.

How can doctors figure out what bacteria are infecting someone? They take different samples of blood, urine, and other fluids, make whatever is in it grow, and look at it under a microscope. They can even test different antibiotics to see which medicines can kill the bacteria!

Tap water has a shelf-life of 6 months, after which chlorine dissipates and bacteria starts to grow.

There's a breed of bacteria that lives in hairspray.

A good way to prevent spreading bacteria to others is to cover the mouth and nose when coughing and sneezing. Using a Kleenex is also a good idea, but must be thrown away after use. Make sure to wash hands after coughing or sneezing as well.
Supplements like zinc and vitamin C support the immune system and can help fight infection.

When two people kiss, they exchange between 10 million and 1 billion bacteria.