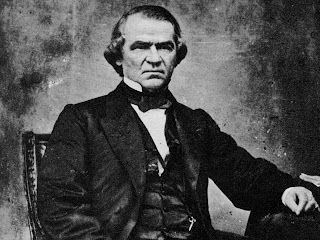 Andrew Johnson was Vice President of the United States of America under President Abraham Lincoln and the seventeenth President of the Unite States when Lincoln was assassinated on April 14, 1865. Since Lincoln was assassinated not long after his inauguration, Johnson served for nearly a complete term, but lost the his party's nomination for the presidency in 1868 and with it a chance to serve a second term. His presidency was marked by nearly continual political and legal battles with the Republican dominated Congress, which culminated with his impeachment in February 1868 by the House of Representatives, although the Senate voted not to convict. Johnson was born on December 29, 1808 in Raleigh, North Carolina to Jacob and Mary Johnson. Growing up in poverty, Johnson was not formally educated and worked as a tailor as a young man and moved throughout the southeast. Johnson eventually moved to eastern Tennessee, where he met his future wife, Eliza McCardle. The couple were married by Thomas Lincoln, the father of Abraham Lincoln.

Despite lacking a formal education, Johnson learned how to read and write from a number of different people, including his wife.

Johnson never attended school at all. In fact, he taught himself to read. Once he and his brother escaped from their "master," he opened up his own tailoring shop in order to make money. You can see his tailor shop at the Andrew Johnson National Historic Site in Greeneville, Tennessee.

Johnson began his political career in the Tennessee state legislature and although not initially a member of a party, he eventually became an ardent Jacksonian Democrat.

By the time that Johnson became president, his wife was an invalid, confined to her room all the time. Their daughter Martha served as hostess during formal functions.

Johnson was known to be an excellent orator and debater.

Johnson opened his tailor shop when he was just 19, and by the age of 22, he was elected the mayor of Greeneville, Tennessee. He served as mayor for four years. He was then elected to the Tennessee House of Representatives in 1835. He later became a Tennessee State Senator before being elected to the Congress in 1843.

From 1843 to 1853 Johnson represented Tennessee's 1st District in the United States House of Representatives
Johnson was elected to serve as Tennessee's governor from October 15, 1853 to November 3, 1857 and served as military governor of the state during the Civil War.

In 1862, Abraham Lincoln appointed Johnson to be the military governor of Tennessee. Then in 1864, Lincoln chose him to join the ticket as his vice president. Together they handily beat the Democrats.

Johnson was United States Senator from Tennessee from 1857 to 1862.

Initially, the conspirators in the assassination of Abraham Lincoln also planned on killing Andrew Johnson. However, George Atzerodt, his supposed assassin, backed out. Johnson was sworn in as president on April 15, 1865.

Although a slave owner, Johnson agreed with the Emancipation Proclamation.

In 1867, Congress passed the Tenure of Office Act. This denied the president the right to remove his own appointed officials from office. Despite the Act, Johnson removed Edwin Stanton, his Secretary of War, from office in 1868. He put war hero Ulysses S. Grant in his place. Because of this, the House of Representatives voted to impeach him, making him the first president to be impeached. However, because of the vote of Edmund G. Ross kept the Senate from removing him from office.

During the 1864 U.S. Presidential Election, although a Democrat, Johnson ran as Lincoln's vice presidential candidate on the "Union Ticket."

He traveled across the state of Tennessee speaking against secession. When Tennessee eventually did secede, Johnson was the only senator from the South to continue working for the U.S. government.

Johnson favored a lenient Reconstruction in the south, whereby each state would be allowed to reassemble their governments and to determine the voting rights of black men.

As president, Johnson focused on bringing the Southern states back into the Union. He pardoned most of the Confederates and allowed the rebel states to elect new governments.

Since he was a Democrat, a southerner, and favored lenient Reconstruction, Johnson immediately found himself at odds with the "Radical" faction of the Republican Party.

In 1866, Johnson vetoed the Freedmen’s Bureau bill and the Civil Rights bill. Both bills were intended to protect the rights of African Americans. When Congress passed the Fourteenth Amendment granting citizenship to former slaves, he urged Southern states not to ratify it.

Johnson vetoed so many bills that he became known as “The Veto President.” Congress felt that he was abusing his power.

During the celebration of George Washington's birthday on February 22, 1866, Johnson gave a fiery speech where he accused several Radical Republicans, such as Massachusetts Senator Charles Sumner, of plotting his assassination.

In 1868, Johnson didn’t run for re-election. He hoped that the Democrats would choose him as their nominee, but they chose Horatio Seymour, a former New York governor, instead.

Johnson vetoed the Voting Rights Act of 1866 on March 27, 1866, which would have given citizenship to former slaves.

In 1872, he also ran unsuccessfully for the House of Representatives. He kept trying and won election to the Senate in 1875. He is the only ex-president to be elected to the Senate.

Although the Republicans were continually exasperated by Johnson's continual vetoes of their bills, the immediate cause of the impeachment was Johnson's dismissal of Secretary of War Edwin Stanton.

Johnson was buried in Greenville, South Carolina with a copy of the U.S. Constitution and an American flag.

After a three month impeachment trial in the Senate, Johnson was acquitted in May 1868.

Johnson had most of the U.S. Constitution memorized.

After his presidential term was over, Johnson returned to Tennessee where he unsuccessfully ran for the U.S. Senate and Congress.

His son Robert committed suicide in 1869.

Johnson died on July 30, 1875 at the age of sixty-six due to complications from multiple strokes.