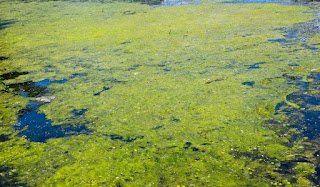 Algae are large and diverse group of eukaryotic organisms that belong to the kingdom Protista. There are 72.500 species of algae that can be found all over the world. Most species live in the marine and freshwater ecosystems, while some can be found on the land. Certain algae are adapted to the life in extreme conditions: polar regions (they live on the snow) or boiling water (in the Yellowstone park). Depending on the species, algae can be free-floating or sessile organisms (spend their life attached to the substrate).

The burps and flatulence of livestock constitute 15 percent of the greenhouse gases that mankind emits each year. Australian researchers recently discovered that a little Asparagopsis seaweed added to animal feed stops gut bacteria from producing gas. Emissions are reduced by 50 to 85 percent.

Algae can consist of only one or large number of cells. They can be microscopically small, or extremely large, nearly 200 feet long (kelp).

Even though some algae look like plants, they lack leaves, roots, stomata, phloem and xylem that are typical for vascular plants. Some algae have amoeba-like body and ability to actively hunt and kill the prey (like animals).

Algae play important role in the aquatic ecosystems. They serve as food for many fish and provide shelter for various animals.

Maximum length, in feet, that kelp, the largest algae, can grow: 200.

Algae contain chlorophyll, photosynthetic pigment which facilitates absorption of light and manufacture of food in a process called photosynthesis (carbon dioxide and water are converted into sugar). Both aquatic and terrestrial animals use oxygen, eliminated as a by-product of photosynthesis, for breathing. Since ocean covers 71% of our planet, algae are responsible for the production of 87% of the oxygen on Earth.

Times more productive algae is than traditional crops as a biofuel: 50.

Algae were responsible for killing of great number of early forms of life on the planet because of their inability to tolerate oxygen.

Number of Continental Airlines flight that, in November, was the first U.S. commercial passenger trip powered by algae biofuel: 1403.

Years ago, after a mass extinction, that algae and bacteria consumed all of the sea’s oxygen, slowing the earth’s recovery: 250,000,000.

Certain algae (called Dino-flagellate) produce light (phenomenon called bioluminescence) that is easily visible during the night. Large groups of algae produce enough light to ensure reading of the newspapers without any additional source of light.

Number of glowing algae that can be found in a gallon of water from Puerto Rico’s bioluminescent bays: 720,000.

Algae are used for the production of biofuel. They are also used as fertilizers and livestock feed.

Number of moderate to large algal cells, per milliliter of water, needed for an algal bloom: 15,000.

Algae are often used to reduce emission of carbon dioxide in the power plants and to facilitate cleansing of the wastewater instead of harsh chemicals that were used for this purpose in the past.

Area, in square miles, of the Mississippi River’s dead zone, where decaying algae have depleted oxygen: 8,500.

Algae are used in human diet. Seaweeds are rich in vitamins and minerals and they represent important source of food in Asia.

Number of cells in the most basic algae: 1.

Swallow a single drop of ocean water and you’ll swallow thousands of microscopic algae. There are more algae in the oceans than stars in the Universe.

Fossilized algae are used for the manufacture of dynamite.

Algae are the base of the marine food chain: without algae, there would be no fish or any other sea animals.

Agar, gelatinous substance extracted from red algae is used as growth medium for bacteria and fungi in the labs.

All plants evolved from algae. Without plants to eat, fish would never have evolved to become land animals, including us.

Algae reproduce asexually via simple division or sexually via fusion of male and female gametes.

Coral reefs depend on algae. Symbiotic algae that live inside corals (which are animals) create sugars through photosynthesis. Those sugars provide 90 percent of the corals’ energy needs.

Algae can survive from few days to few years, depending on the species.

Our brains are dependent on the iodine and omega-3 oils that algae contain. When we don’t eat algae (or sea creatures that dined on algae) we run the risk of thyroid deficiency and lower IQs. Some scientists attribute the expansion of the hominid brain to access to seaweed and algae-eating fish.