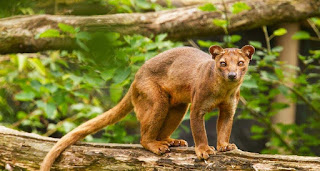 Fossa is a cat-like creature that closely related to the mongoose family. They can be found only in the tropical rainforests of the Madagascar. Fossa is the largest predator on the island and it does not have natural enemies, but due to extreme deforestation (90% of the forest is already destroyed) it is listed as an endangered species. Less than 2500 animals are left in the wild.

Endemic to Madagascar, fossas are found throughout the island, though in the Central Highlands, it is only in certain areas, like the Andringitra Massif. This species inhabits all forested areas on Madagascar, from mountainous areas down to the coastal lowlands.

Fossa has black, brown or red fur and long slender body. Although they look like cats, they are more closely related to mongooses. Characteristic features are round ears, large eyes and short snout with long whiskers.

These animals are remarkably agile at both leaping and climbing, with great help from their long, slender tail. Because they move from place to place on their flat soles, this gives them more stability and balance when making precarious landings on branches.

Some specimens may grow to almost 2 meters in length, but most animals reach between 24 and 34 inches, with the tail of almost the same length. Since fossa is active climber, it is slim and weighs usually between 15 and 28.5 pounds. Males are larger than females.

Although largely nocturnal, fossas also hunt in the day, especially when food is scarce, but usually they rest during the day in a cave, hollow tree, or abandoned termite mound.

Fossa is nocturnal animal (active during the night), but when the food sources are scarce, it can switch to daily hunt.

Fossas are carnivores, they eat small mammals, birds, amphibians, reptiles, and insects. They will also prey on lemurs.

Fossa is carnivore and 50% of its diet is composed of lemurs. They hunt any of 30 different species of lemurs that reside the Madagascar. Besides lemurs, fossa also eats small mammals, birds, fish, lizards, frogs and domestic animals (such as chickens). Many farmers kill fossa because they want to protect their livestock.

Fossas have a most unusual mating system. Mating takes place from September to October.

A female will occupy a site on her own, high in a tree, and a number of males will congregate below, and compete for mating rights.

Fossa is very agile animal. It spends most of the time in the trees, by hanging from the branches or by jumping from one tree to another. Tail ensures required balance for all these acrobatic maneuvers.

Habitat loss is amongst the main reasons for the decline in the fossa population, fragmented populations becoming isolated in the forest patches that remain. However, the most important threat to their survival is probably local farmers, who see fossas as significant predators of poultry.

Fossa has retractable (can be pulled inside the paw) and sharp claws which are used both for hunting and for hanging on the trees.

The fossa is widely distributed on Madagascar but it is very scarce and rare in most areas. According to the IUCN Red List the total fossa population size is between 2,635 and 8,626 adults. Currently this species is classified as Vulnerable (VU) and its numbers continue to decrease.

Fossa is a speedy runner. It can reach a speed of 35 miles per hour.

A fossa is the top mammalian predator on Madagascar, impacting the numbers of many species of small birds, mammals, reptiles, and amphibians that they eat.

Fossa has excellent sense of hearing, smell and eyesight.

Fossa is said “foosa” and “foosh.”

Fossa communicates using wide range of vocal sounds, visual stimuli, body language and scents. Vocalization includes purrs (when they are threatened), repeated loud, coarse inhalations and gasps of breath (when they are afraid) or high yelp (when single animal try to attract other fossas).

Fossas go down a tree headfirst, the way squirrels do.

Mating season lasts from October to December. Males are especially aggressive during this period and they often fight with each other to attract female's attention. Winner of the battle gets the chance to mate with the female.

Fossas are related to mongooses, but until recently, were mistaken for a primitive sort of cat.

Female mates with more than one male during mating season. After mating, females create a den on the ground, where the babies will be born.

Fossas have retractable sharp claws which they use for hunting as well as for hanging onto trees.

Fossa reproduces slowly. Pregnancy lasts 6 to 7 weeks and ends with 2 to 4 babies. Babies have only 3.5 ounces on birth, they are blind and toothless. They will open their eyes for the first time 16-25 days after birth.

A fossa communicates with a wide range of visual stimuli, vocal sounds, body language and scents. The sounds they make include purrs (when threatened), repeated loud, coarse gasps and inhalations (when afraid) or a high yelp (to attract the attention of another fossa).

Young fossa starts eating solid food with 12 weeks, but it will not become independent until it reaches one year. Fossa becomes fully mature with 4 years.

Fossa can live up to 20 years in captivity. Life span in the wild is much shorter.

The fossa and the modern mongoose come from the same ancestor, one which arrived on the island of Madagascar around 21 million years ago.