Fun Facts About the Motorcycle 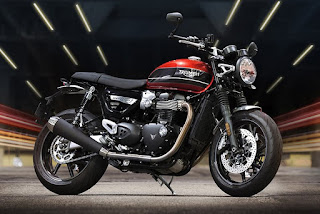 A motorcycle also known as bike, motorbike, or cycle is a two wheeled motor vehicle.

According to the Guinness World Book of Records, the earliest internal combustion-engine motorized bicycle was the Daimler Reitwagaen, and was invented in 1885 by Gottlieb Daimler and Wilhelm Maybach in Germany. It was named ‘Einspur’, and was lost in a fire in 1903.

The history of the motorcycle begins in the second half of the 19th century.

The first-ever Harley-Davidson motorcycle only went 25 mph (40 kph). It also had a single-cylinder engine that initially used an empty tomato can for its carburetor.

First steam-powered motorcycle was made during 1867, in the factory of famous bicycle inventor Pierre Michaux.

Japan once built a motorcycle that was indirectly powered by human waste. Its name is the Toilet Bike Neo, and its creator is high-end toilet manufacturer Toto. The bike uses human waste that’s turned into biofuel. It’s then stored inside two compressed gas cylinders and are placed on the bike to allow it to run a distance of 300 km before refilling.

The Daimler Petroleum Reitwagen (“riding car”) or Einspur (“single track”) was a motor vehicle made by Gottlieb Daimler and Wilhelm Maybach in 1885. It is widely recognized as the first motorcycle. Daimler is often called “the father of the motorcycle” for this invention.

Vespa, the iconic Italian scooter manufactured by Piaggio, was what 51-year old, former CEO Andre Pininfarina (of the Italiancoachbuilder and car designer Pininfarina) was riding when he died after colliding with a Ford Focus that was driven by a 78-year old man.

In the decade from the late 1880s, dozens of designs and machines emerged, particularly in Germany and in England, and soon spread to the United States. During this early period of motorcycle history there were many manufacturers, since bicycle makers were adapting their designs for the new internal combustion engine.

The longest journey ever made with the use of a motorcycle comes from Emilio Scotto of Buenos Aires, Argentina. According to the Guinness World Book of Records, he covered over 735,000 km (457,000 miles) and 214 countries and territories, from 17 January 1985 to 2 April 1995.

In 1894 Hildebrand & Wolfmüller became the first series production motorcycle, and the first to be called a “motorcycle”. It is estimated that somewhere in between 800 and 2,000 motorbikes were made – of which only a dozen survive worldwide.

The longest distance a man rode a motorcycle in 24 hours was 3,256.5 km (2023.5 miles). Earning a spot in the Guinness World Book of Records for this attempt was Matthew McKelvey aka Bushy (South Africa), who drove his bike at Phakisa Freeway in Welkom, South Africa, on 8 October 2014.

In 1898, Triumph Motorcycles in England began producing motorbikes, and by 1903 it was producing over 500 bikes.

Helmet use was actually mandated following Colonel T.E. Lawrence‘s (Lawrence of Arabia) death in a motorcycle accident. He was killed after he swerved to avoid two boys riding a bicycle.

Indian began production in 1901 and Harley-Davidson was established two years later. By the outbreak of the First World War, the largest motorcycle manufacturer in the world was Indian, producing over 20,000 bikes per year.

The oldest surviving Russian-manufactured motorcycle, the Rossiya, dates from 1902.

During the First World War, motorbike production was greatly ramped up for the war effort to supply effective communications with front line troops.

By 1920, Harley-Davidson was the largest manufacturer, with their motorcycles being sold by dealers in 67 countries.

After the end of Second World War, American War veterans started gathering themselves into loosely organized motorcycle clubs. They become very famous after their portrayal in Marlon Brando’s 1954 film “The Wild One”.

The first ever blind person to set the record in 2003 for riding a motorbike was Billy Baxter, who lost his eyesight when he was serving in Bosnia.

A chopper is a type of custom motorcycle which emerged in California in the late 1950s. The chopper is perhaps the most extreme of all custom styles, often using radically modified steering angles and lengthened forks for a stretched-out appearance. Perhaps the best known choppers are the two customized Harley-Davidsons, the “Captain America” and “Billy Bike”, seen in the 1969 film Easy Rider.

Suzuki, Kawasaki and the Yamaha each started producing motorcycles in the 1950s.

The term “motorcycle” (or “motorrad” in German) was first used in 1894 by Hildebrand & Wolfmüller.

The hyper sports Kawasaki Ninja H2R is the fastest production superbike till date. It’s a track only motorcycle. Turkish rider Kenan Sofuoğlu nailed the stunning mark of 400 kilometers per hour (249 miles per hour) riding this bike in 2016.