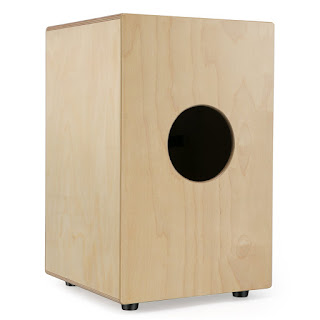 The cajon is thought to have been created by African slaves working in the tea plantations of Peru, most probably in the 18th Century. The original instrument is thought to date back further to the box drums of Africa.

Early cajons were often made from shipping cartons brought over on Spanish ships in Spanish colonial America. Small dresser drawers were often converted to instruments as well whenever possible.

Traditional Peruvian cajons still have no snare wires inside so are much closer to the original African box drums, producing a much drier sound than cajons with snares.

The cajon is considered to be a percussion instrument. I is usually 18 inches in height and about 12 inches wide and deep.

In Cuba, the cajon served a much more conga-orientated role than that of a drum kit. Consequently, Cuban cajons vary in shape, some more resembling their conga counterparts. They are also held in a different way, the top surface being played, just like the top head of the conga would be hit.

Five sides of the cajon are usually made of a thicker wood than the front side where the musician slaps with his/her hand.

The front side is thinner and is referred to as the head.

Most people use the cajon in place of a conventional drum kit but there are many other ways it can be used to fit in, either with or without a drum kit.

Modern cajons have feet often made of rubber, and screws in the top of the instrument that allow for adjustment of sound.

A bass drum sound is achieved by hitting the center of the front, or head, and a higher tone is achieved by striking the instrument closer to the top of the head's surface.

When the musician sits on the cajon they tilt it slightly while playing. Some musicians also slap other surfaces of the cajon as well, to make different sounds than those that occur from slapping the front, or head, of the instrument.

Cajons are popular instruments in Spain, the Philippines, and in the Americas.

The cajon is a popular instrument in several music styles including Cuban Rumba, Flamenco, Peruvian Waltz, Zamacueca, and Tondero.

In modern music the cajon is often used as an accompaniment to the acoustic guitar, and it is even used to replace full drum kits when space is limited.

The cajon is gaining popularity in other types of music including jazz, funk, rock, pop, and blues.

Irish folk music has adopted the use of the cajon in much of its music.

Hands are not the only striking tool for the cajon. Musicians also use metal brushes, plastic brushes, sticks, mallets, and some use the drum pedal usually used for a bass drum.

The cajon can also be played in an orchestra as part of classical music.

Some percussionists attach a bass drum pedal to the instrument, enabling them to play it with a single foot.

The Peruvian National Institute of Culture declared the cajon National Heritage in 2001.

Another way of playing the cajón is to use an ordinary bass drum pedal, thus turning the cajón into an indirect percussion instrument which can be played with the feet.

The Organization of American States declared that the cajon was an "Instrument of Peru for the Americas" in 2014.