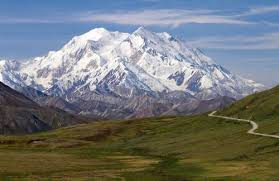 Mount McKinley, otherwise called Denali (since its name change in 2015), is the most elevated mountain in Alaska, and in North America. The Athabaskan Natives initially named the mountain Denali, which signifies 'high one' yet in 1896 a gold miner renamed the mountain Mount McKinley after U.S. President William McKinley. McKinley never visited the mountain, or even Alaska, and in 1975 the province of Alaska changed its name back to Denali. In 2015 President Obama endorsed the change at a government level. Denali is situated in Alaska, roughly 130 miles northwest of Anchorage and 170 miles southwest of Fairbanks.

Denali's peak is 20,310 feet above sea level, making it the highest mountain in North America.

Denali is the third highest of the Seven Summits (the highest peaks of the 7 continents) following Mount Everest in Nepal and Aconcagua in Argentina.

Located in the Alaska Range in the interior of the U.S. state of Alaska, Denali is the centerpiece of Denali National Park and Preserve.

The upper half of Denali is permanently covered with snow and has five massive glaciers on its slopes. The longest glacier is the Kahiltna Glacier with a length of 71 kilometers (44 miles).

Prior to Russian or American settlement the Koyukon Athabaskan Natives referred to the mountain as Denali or Dinale.

In 1896 Denali was renamed Mount McKinley.

In 1903, James Wickersham recorded the first attempt at climbing Denali, which was unsuccessful.

In 1906, Frederick Cook claimed the first ascent, which was later proven to be false.

In 1975 the mountain was officially named Denali by the state of Alaska.

The first verifiable ascent to Denali’s summit was achieved on June 7, 1913, by climbers Hudson Stuck, Harry Karstens, Walter Harper, and Robert Tatum, who went by the South Summit.

It took until 2015 for the U.S. government to recognize the name officially. President Barack Obama approved the change to Denali in August 2015.

In 1951, Bradford Washburn pioneered the West Buttress route, considered to be the safest and easiest route, and therefore the most popular currently in use.

Denali has two main summits - the South Summit and the North Summit.

In 1972, first descent on skis down the sheer southwest face, by Sylvain Saudan an extreme skier, dubbed “skier of the impossible.”

The first attempted climb of Denali took place in 1903, by Judge James Wickersham. This route in particular would not be ascended successfully until 1963, due to danger of avalanches. James Wickersham attempted to climb the mountain via Peters Glacier and the North Face. It is now known as Wickersham's Wall.

In 1993, Joan Phelps is the first blind climber to reach the ascent.

An explorer named Dr. Frederick Cook claimed to have made the first successful climb in 1906 but was later proven to have been untrue.

In 2001 Galen Johnston, 11, becomes the youngest person to reach the summit.

Denali's main summit was first successfully reached in 1913 by Walter Harper, a native of Alaska.

In 2013, Alaska resident Tom Choate, 78, breaks the record as the oldest person to reach the summit.

Denali is a popular mountain for climbers, despite its cold climate. Almost 60% of climbers reached the top in 2003, but by this year almost 100 climbers had lost their lives while attempting to reach the top.

In June 2015, a survey team led by Blaine Horner placed two global positioning receivers on the summit to determine the precise position and elevation of the summit. The summit snow depth was measured at 4.6 meters (15 feet). The United States National Geodetic Survey later determined the summit elevation to be 6,190 meters (20,310 feet), not 6,194 meters (20,320 feet), as measured in 1952 using photogrammetry.

To reach Denali's top it can take two to four weeks and most climbers use the West Buttress Route.

In a typical year 1,300 people try to climb Denali.

Barbara Washburn was the first woman to reach the summit of Denali, in 1947.

An estimated 32,000 climbers have attempted Denali with about a 50% success rate.