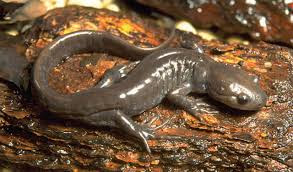 Salamanders can’t hear sounds, so they don’t make any either. However, some species can hug the ground to pick up sound vibrations with their body.

There are about 500 species of salamander.

Salamanders are amphibians that look like a cross between a frog and a lizard. Their bodies are long and slender; their skin is moist and usually smooth; and they have long tails. Salamanders are very diverse; some have four legs; some have two. Also, some have lungs, some have gills, and some have neither — they breathe through their skin.

Amphibians are more diverse in the ways they reproduce than any other vertebrate group. Salamanders are born one of four ways, depending on species. They are born either as larvae in water, as larvae from eggs in water, as miniature adults on land or from eggs on land.

Salamanders are typically more active during cool times of the day and are nocturnal. During the day they lounge under rocks or in trees to stay cool. At night they come out to eat.

Salamanders live in rivers, swamps, forests and caves. Some spend their entire lives in water, while others migrate between water and soil for seasonal events like spawning.

Their bright, colorful skin warns predators to stay away, according to the San Diego Zoo. Many salamanders have glands on their necks or tails that secrete a bad-tasting or even poisonous liquid. Some can also protect themselves from predators by squeezing their muscles to make the needle-sharp tips of their ribs poke through their skin and into the enemy.

Most salamanders species have lifespan about 10 to 20 years; but some species live up to 55 years.

Some species can shed their tails during an attack and grow a new one. The axolotl, an aquatic salamander, can grow back limbs lost in fights with predators and damaged organs due to a special immune system.

Salamanders are carnivores, which means they eat meat instead of vegetation. They prefer other slow-moving prey, such as worms, slugs and snails. Some larger types eat fish, small crustaceans and insects. Some salamanders eat frogs, mice and even other salamanders.

Many salamanders lay eggs, but not all. The alpine salamander and fire salamander give birth to live offspring, for example.

In regions where the temperature goes below freezing, they often hibernate.

Some salamander species have lungs, some have gills, and some have neither — they breathe through their skin.

Spiny salamanders guard their eggs by curling their bodies around them. They also turn them over from time to time. Some newts wrap leaves around each egg to keep them safe.

They are capable of regenerating lost limbs, as well as other damaged parts of their bodies. They routinely regenerate complex tissues.

Salamander eggs are clear and jelly-like, much like frog eggs. In fact, baby salamanders are just like baby frogs; their eggs are laid in water and the young are born without legs. Young salamanders in the larval stage are called efts, according to the San Diego Zoo. They resemble tadpoles, and as they get older, they grow legs.

Salamanders can drop their tail to escape predators. The tail will drop off and wriggle around for a little while, and the salamanders will either run away or stay still enough to not be noticed while the predator is distracted.

Some salamanders don’t become sexually mature for up to 3 years and some live up to 55 years.

The skin of some species contains the powerful poison tetrodotoxin; these salamanders tend to have bright warning coloration.

Salamanders are a group of amphibians typically characterized by a lizard-like appearance.

All salamanders are carnivores, but they are seldom in a hurry to catch their meals. Because they move more slowly than other meat eaters, salamanders tend to eat slow-moving, soft-bodied creatures such as earthworms, slugs, and snails. Larger species may eat fish, crayfish, and small mammals such as mice and shrews. They might approach their target slowly, and then make a quick grab with their sharp teeth. Or they might hide and wait for a tasty meal to pass close enough to snatch. Several species can flick out their tongues to catch food as it goes by.

Some species of salamanders are shrinking from generation to generation in response to climate change. According to researchers at the University of Maryland, salamanders that live in the Appalachian Mountains are shrinking because they must burn more energy as the local climate gets hotter and drier.

Like other amphibians, they absorb water through their skins.

Salamanders usually move very slowly, although they can run quickly to get away from danger. Andean salamander is the fastest salamander species – it can reach speeds of about 24 km/h (15 mph).
Share This