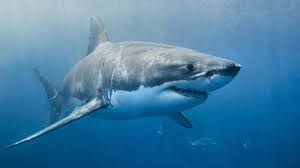 Great White Sharks live and hunt on the coast of every continent in the world except Antarctica.

Females are larger than males.

They generally prefer to live in cooler waters that have temperatures ranging from 54-75° fahrenheit.

Dorsal side (their backs) of the shark's body is dark in color (black, grey, brownish) and their bellies are completely white. Specific body coloration is excellent camouflage that prevents prey from seeing the shark.

Most of the world’s Great White Sharks live off the coast of Dyer Island, in South Africa, this area is also referred to as “Shark Alley.”

Clocking in at speeds up to 35 mph, Great White Sharks are some of the fastest predators in the oceans.

Though they tend stay to close to the shore in shallower waters, they have been spotted swimming in open waters at depths of up to 3,900 feet.

Great White Sharks don't have eyelids, but they can roll their eyeballs during attack to prevent eye injury. This is especially important when they hunt sea lions which have sharp claws. In the last moment of the attack - sharks are practically blind. Other than that, they have excellent eyesight.

Early fossil records show that Great White Sharks have been swimming in Earth’s oceans for around 16 million years, though scientists believe they may be much older.

Scientists previously thought the life expectancy of a Great White Shark was around 25 years, but a recent study shows that their life expectancy is actually around 70 years.

Great White Sharks have excellent sense of smell: they can smell one drop of blood in a million drops of water!

Most sharks become motionless when they are flipped over. This phenomenon is called "tonic immobility" and Great Whites may experience it also. Orcas use this technique to defeat Great White Shark - they keep the shark flipped over until it stops breathing.

The heaviest Great White Shark ever recorded in the wild was estimated to weigh in at a whopping 7,328 pounds.

Great Whites have electro-receptors which detect electric field of all animals in the water. They use these receptors to locate a prey.

Like most shark species, female Great White Sharks grow much larger than the males.

Great White Sharks may attack people, but they will not eat them. Attack happens because sharks mix people with seals or other prey that they normally eat. Since people don't have as much fat as shark needs, they will not be eaten. More people die in a toaster related accidents than after a shark attack.

These sharks grow slowly. Males reach maturity at the age of 10, and females at age of 15. Females will give birth to 2-10 live sharks after 12 month of pregnancy. Sharks don't show parental care and babies take care of themselves from the moment they are born.

The largest Great White Shark ever recorded in the wild was estimated to be 26 feet long, more than half the length of a basketball court.

Great Whites that live near the coast of South Africa are famous for their majestic jumps from the water.

Caught off the coast of Kangaroo Island in Australia, the largest captured Great White Shark was 23.4 feet long.

Great White sharks are solitary animals (live on their own). They gather only during mating season.

There have been claims of larger Great White Sharks, but they have mostly turned out to be Basking Sharks which are very similar in appearance.

In close range, they can even sense the heartbeat of immobile prey.

Great White Sharks can't live in captivity (in aquariums) because they become disoriented and collide with aquarium glass all the time.

In a single year, Great White Sharks eat average of 11 tons of food.

Men kill over 100 million sharks each year! Number of sharks is drastically reduced and these animals are now classified as critically endangered. Some scientists estimate that only 10.000 Great White Sharks are left in the wild.
Great White Sharks live up to 60 years.

Once they have fed, Great White Sharks can go a whole three months without having to eat another meal.

They use electromagnetic fields to feel vibrations in the water of potential prey.