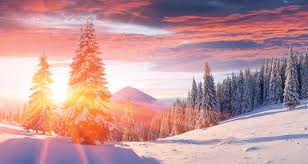 The word "solstice" comes from the Latin solstitium, meaning "point at which the sun stands still." Since when has the sun ever moved?! Of course, before Renaissance astronomer Nicolaus Copernicus came up with the 'ol heliocentric model, we all figured that everything revolved around the Earth, sun included. Our continued use of the word "solstice" is a beautiful reminder of just how far we've come and provides a nice opportunity to give a tip of the hat to great thinkers who challenged the status quo.

The word solstice is derived from Latin, meaning 'sun stands still' and was chosen because during a solstice the sun appears to remain still in its position in the sky.

Although the solstice is marked by a whole day on the calendar, it's actually just the brief moment when the sun is exactly over the Tropic of Capricorn that the event occurs.

Since 1793, the full moon has only occurred on the winter solstice 10 times, according to the Farmer's Almanac. The last one was in 2010, which was also a lunar eclipse! The next full moon on a winter solstice won't be until 2094.

For days before and after the winter solstice occurs, the sun appears to stand still in the sky at its noon-time elevation.
Some confuse the solstice with the equinox. Both occur twice a year, but the equinox occurs when the sun is directly above the equator, day and night are equal in length, and the equinox marks the beginnings of fall and spring, depending on the hemisphere.

Since Christ wasn't issued a birth certificate, there's no record of the date when he was supposed to have been born. Meanwhile, humans have been celebrating the winter solstice throughout history — the Romans had their feast of Saturnalia, early German and Nordic pagans had their yuletide celebrations. Even Stonehenge has connections to the solstice. But eventually Christian leaders, endeavoring to attract pagans to their faith, added Christian meaning to these traditional festivals. Many Christmas customs, like the Christmas tree, can be directly traced to solstice celebrations.

Stonehenge, in Wiltshire, England is a popular spot during winter and summer solstice in the northern hemisphere. Newgrange in Ireland is another monument dating back thousands of years that appears to have been built in alignment with the solstice.

The winter solstice is also referred to as Midwinter, the Longest Night, and Yule.

Solstices have been used throughout history to time many important events each year, including the sowing of seeds for crops, mating of animals, harvesting of crops, and monitoring the reserves of winter food.

During the winter solstice the sun appears to be at its lowest point in the sky.

Following the winter solstice the days begin to become longer while the nights begin to shorten.

During the solstice, whether it is summer or winter solstice, the sun isn't moving - it's actually the earth tilting to and away from the sun.

Although winter solstice marks the beginning of the astrological winter, the coldest winter days are yet to come, often not for a month or even two in some years.