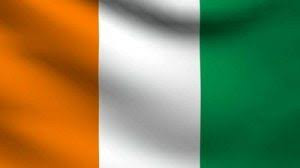 The ethnic groups that make up the Ivory Coast from the least to greatest proportion of the population include Lebanese, French, Southern Mandes, Krous, Northern Mandes, Voltaiques or Gur, and Akan.

It is bordered by Guinea and Liberia in the west, Burkina Faso and Mali in the north, and Ghana in the east and the Atlantic Ocean in the south.

The most dominant religion of the Ivory Coast is Islam, followed by Christianity.

Agriculture is important to the economy of the Ivory Coast. Major exports include palm oil, coffee, and cocoa beans.

Fishing and forestry are also important to the country's economy.

The Ivory Coast produces more cocoa than any other country in the world, making it known for its chocolate.

The currency of the Ivory Coast is the West African Franc, a currency also used by Togo, Senegal, Niger, Mali, Guinea-Bissau, Burkina Faso, and Benin.

The highest elevation is Mount Richard-Molard, at 1,752 meters (5,748 feet) in the far west of the country along the border with Guinea and Liberia.

The largest Basilica in the world is located in Yamoussoukro, in the Ivory Coast. It is the Basilica of Our Lady of Peace. It is 323,000 square feet in size.

The Ivory Coast's landscape consists of large flat areas of Savannah, excellent for farming and agriculture, forests, and mountains in north-west regions.

Despite gaining independence from France in 1960 the Ivory Coast had a supreme leader until 1993 when he died. After his death formal elections were held for the first time.

A major food market is held in Abidjan where traders from all along the coast come to buy and sell.

Little is known about Ivory Coast’s first inhabitants, but weapon and tool fragments confirm the presence of early settlements (15,000 to 10,000 BC.).

Abidjan is the fashion capital of the Ivory Coast and of sub-Saharan Africa. Designer clothing can be purchased in boutiques in the city.

The name 'Les Elephants' which means 'the elephants' is the nickname for the Ivory Coasts' national football team.

Between 1000 to 1500 AD, Muslim merchants established trade routes from northern Africa to Ivory Coast. They came for gold, ivory and slaves.

There have been several civil wars in the Ivory Coast since its independence from France in 1960, including the 2011 Civil War.