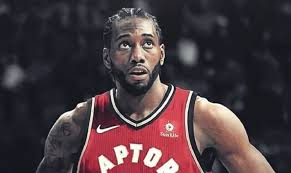 Kawhi Anthony Leonard is an American professional basketball player for the Toronto Raptors of the National Basketball Association. Leonard played two seasons of college basketball for the San Diego State Aztecs, and was a consensus second-team All-American as a sophomore.

Here are some facts about Kawhi Leonard:

He is the first Jordan Brand athlete to be named Finals MVP since Michael Jordan.

Eight of the 14 players drafted ahead of him in 2011 have not made it to the playoffs once. Leonard has made the playoffs every year of his career.

Kawhi Leonard is a two-time NBA Defensive Player of the Year award winner and the 2014 NBA Finals MVP.

at 22, he was the youngest Finals MVP since Magic Johnson.

He is the youngest child and has four older sisters.

Leonard was named Finals MVP and NBA Defensive Player of the Year before being selected to his first NBA All-Star game.

He was born to Mike Leonard and Kim Robertson on June 29, 1991 in Los Angeles.

A handshake with Leonard is one to be remembered: According to the New York Times, Leonard’s hand measures 11.25 inches across from thumb to pinkie and 9.75 inches long. This is a staggering 52 percent wider than the average man’s hand. Though
Leonard stands 6-foot-7, his wingspan is listed at 7-foot-3.

He attended Martin Luther King High School in Los Angeles, California, and graduated in 2009. The same year, he earned the title of Mr. Basketball California.

During his time in San Antonio, Leonard became a star away from the floor in team promotional videos in partnership with local grocery chain H-E-B.

He spent some of his childhood bonding and helping out his father at his car wash.

He drove the same ride he had in college, a Chevy Malibu, during his first year in the NBA then finally spoiled himself with a Porsche, after being pressured by his family and friends. "I don't have a car not on it. It's good on gas. It's a good commuter car [...]," he told the San Diego Union-Tribune.

After missing basketball tryouts due to lack of transportation because his mom was out of town, he lost a spot on the team. He told The New York Times he emailed his coach about the situation but was still unable to play. So, he played football instead his freshman year.

According to the San Diego Union Tribune, he shared a two-story home with his mom during his first three years in San Antonio.

He had the team's fifth Larry O'Brien trophy with him in San Diego as part of the tour but it spent two of the three days of the trip in his condo because his devotion to his three-a-day workouts kept him occupied.

"I don't have time to do anything with it," he told the San Diego Union Tribune. "I'm just a low-key guy. I'm just happy we won it. I don't even care about the trophy. The title matters most."

He was originally drafter by the Indiana Pacers. Thankfully, he found out he had been traded to the Spurs five minutes after shaking hands with David Stern in a Pacers hat, because that just doesn't look right.

He's known for being reserved but somehow he's been able to make some pretty popular friends. Here he is with rapper Lil Wayne and his manager, Cortez Bryant, who is a mega Spurs fan.

He attended San Diego State for two years. He'd leave his house at 5 a.m. every morning to workout before his college classes and it paid off -- he was 2-time first team all-conference and a consensus second team all-American his sophomore year.

Months before being drafted, he was focused on his college career over raking in millions. "My family doesn't need the money right now. We're not starving, hungry, living poor. It will be nice to have a lot of money, but I think my family could hold out for two more years if I play through my senior year," he told The New York Times.