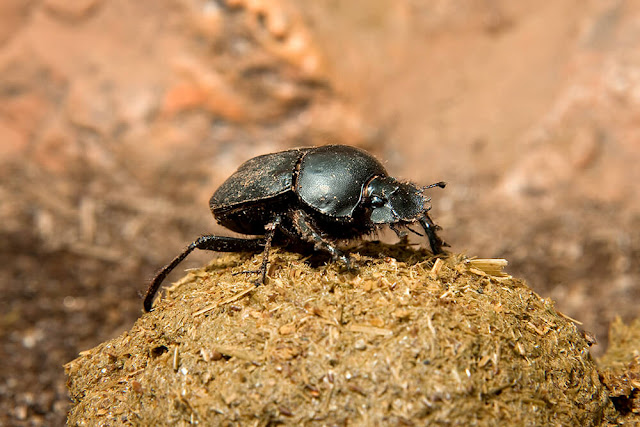 Some dung beetles ride on the animals, whose feces they like to eat, until they are ready to poop. After animal release its feces, beetle jumps down and start to feast. Other dung beetles use their sense of smell to detect the dung they prefer.

Dung beetles are beetles that feed partly or exclusively on feces.

There are around 8,000 species of dung beetles known, and they live all around the world, except for a few islands and the cold polar regions.

Dung beetles live in many habitats, including desert, grasslands and savannas, farmlands, and native and planted forests.

These beetles have a lifespan of up to 3 years.

Dung beetles are like all insects, they have a head, thorax, and abdomen, and six legs. Their bodies tend to be very solid and tough.

Dung beetles are very strong animals. They can carry the weight which is 50 times heavier than their body weight.

Dung beetles vary in size. Their length ranges from 0.004 inches to 2.4 inches.

Dung beetles have modified wings: the first pair of wings is small and very hard, and acts as a protective covering for the second pair of wings.

They have impressive “weapons,” some with a large, hornlike structure on the head or thorax that males use for fighting. They have spurs on their back legs that help them roll the dung balls, and their strong front legs are good for fighting as well as digging.

Dung beetles can come in a variety of colors from dull and glossy black to metallic green and red.

These interesting beetles fly around in search of manure deposits, or pats, from herbivores like cows and elephants.

Dung beetles have well developed wings and six legs which help them dig tunnels and collect (and roll) the dung.

Many of them also feed on mushrooms and decaying leaves and fruits.

One species of dung beetle in Central Americ eats millipedes. It is a rare example of a scavenger species turned carnivore.

Scientists group dung beetles by the way the beetles make a living: rollers, tunnelers, and dwellers.

Rollers are the most famous – they roll dung into round balls, which are used as a food source or breeding chambers.

Dung beetles are solitary creatures which meet with other beetles only during mating season.

Most dung beetles are dark in color. Some of them have metallic luster or can be even brightly colored.

Tunnelers land on a manure pat and simply dig down into the pat, burying a portion of the dung.

Dwellers, neither roll nor burrow: they simply live in manure. They are often attracted by the dung collected by burrowing owls.

Most dung beetles search for dung using their sensitive sense of smell. With specialized antennae, they can catch a whiff of dung from the air.

They possess exceptional dung disposal capacity and one dung beetle can bury dung that is 250 times heavier than itself in one night.

After capturing the dung, a dung beetle rolls it, following a straight line despite all obstacles.

All dung beetles can be divided in three large categories: rollers, tunnellers and dwellers. Rollers search for dung far away from their homes. When they find it, they collect it in the shape of the balls which they roll back to their burrows. Tunnellers search dung and when they find it, they dig a tunnel where they will store it. Dwellers produce dung on their own at their homes.

Sometimes, dung beetles try to steal the dung ball from another beetle, so the dung beetles have to move rapidly away from a dung pile once they have rolled their ball to prevent it from being stolen.

Dung beetles can roll up to 10 times their weight.

A species of horned dung beetle takes the title for world’s strongest insect. The beetle, called Onthophagus taurus, was found to be able to pull a whopping 1,141 times its own body weight, which is the equivalent of a 70 kilogram (150-pound) person lifting six full double-decker buses.

Dung beetles can eat more than their own weight in 24 hours and play a remarkable role in agriculture and tropical forests. By burying and consuming dung, they improve nutrient recycling and soil structure.

Dung beetles are currently the only known non-human animal to navigate and orient themselves using the Milky Way. The tiny insects can orient themselves to the bright stripe of light generated by our galaxy, and move in a line relative to it, according to recent experiments in South Africa.

3.3 pounds of the elephant dung can vanish in two hours when 16 000 dung beetles arrive to the scene to collect piece of dung for itself.

Average lifespan of dung beetles is 3 to 5 years, depending on the species.

Also a species of dung beetle (the African Scarabaeus zambesianus) navigates by polarization patterns in moonlight, the first animal known to do so.

A pair of dung beetles (a male and a female) may work together, digging a nest to create a burrow. The dung is taken into the burrow in either a ball or an irregular mass. The female lays her eggs in the burrow. The eggs hatch into larvae, which feed on the dung surrounding it. The dung beetle goes through a complete metamorphosis.

Parental care in dung beetles is common, but the extent of care varies greatly from species to species.

Female lays eggs inside the dung or in the underground burrows. Dung beetles undergo complete metamorphosis, which means that they need to pass several changes in the body shape before they become completely formed dung beetles. Metamorphosis includes stages called larvae and pupa before adult insect is formed.

Several species of the dung beetle, most notably the species Scarabaeus sacer (often referred to as the sacred scarab), enjoyed a sacred status among the ancient Egyptians.

One dung beetle can bury dung that is 250 heavier than the beetle itself in one night.

The scarab symbolized self-creation or rebirth. This potent symbolism appears in tomb paintings, manuscripts, hieroglyphic inscriptions on buildings and carvings. In addition to its use as an amulet for the living and the dead, scarabs adorned jewelry including necklaces, bracelets, wrist cuffs and wide decorative collars. A bracelet from the tomb of Tutankhamun featured a bright blue scarab holding a cartouche between its front legs. A cartouche is an oval frame that encloses a name. The ancient Egyptians sometimes painted or carved scarabs on a deceased person’s sarcophagus, the human-shaped coffin that held the mummy. Scarabs often hold a sun disk over their heads.

Their cosmogony includes the scarab beetle rolling its ball of dung with the ball representing the Earth and the beetle the Sun.

Some species of dung beetles lay their eggs in the ball of dung. That way, larvae can start eating the minute they hatch from eggs.

Popular interpretation in modern academia theorizes the hieroglyphic image of the beetle represents a triliteral phonetic that Egyptologists transliterate as xpr or ḫpr and translate as “to come into being”, “to become” or “to transform”.

The scarab remains an item of popular interest thanks to modern fascination with the art and beliefs of ancient Egypt. Scarab beads in semiprecious stones or glazed ceramics can be purchased at most bead shops, while at Luxor Temple a massive ancient scarab has been roped off to discourage visitors from rubbing the base of the statue “for luck”.

In Aesop’s fable “The Eagle and the Beetle”, the eagle kills a hare that has asked for sanctuary with a beetle. The beetle then takes revenge by twice destroying the eagle’s eggs.

Hans Christian Andersen’s “The Dung Beetle” tells the story of a dung beetle who lives in the stable of the king’s horses in an imaginary kingdom.

Dung beetle can also steal a dung ball from another beetle. If the eggs and larvae are already placed inside the ball, thief will eat all of them.