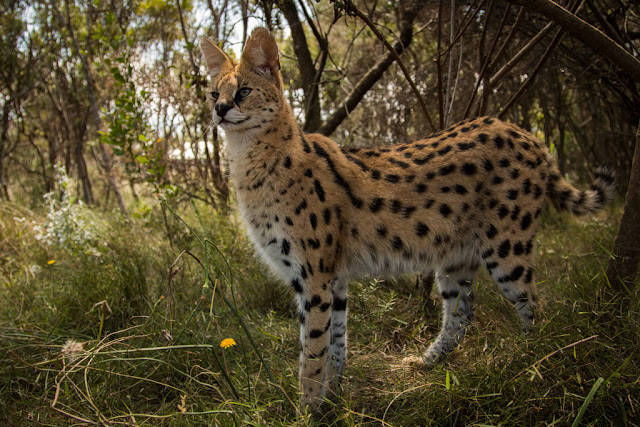 Due to long legs, servals are fast runners; they achieve 45-50 miles per hour. Only cheetahs are faster than servals.

The serval (Leptailurus serval) is a wild medium-sized cat native to Africa.

Servals are solitary animals, which gather only during mating season. They use urine and scratching of the trees to mark their territory which is usually 12-20 square kilometers large.

Servals are rare in North Africa and the Sahel, but widespread in sub-Saharan countries except rainforest regions.

Like most other cat species, servals produce wide range of sounds: high-pitched cry, snarl, growl, spit and purr, which are used for communication.

Servals are found in several habitats. They are common on savannas where there is plenty of water. Servals prefer areas of bush, tall grass, and dry reed beds near streams, but they are also found in high-altitude moorlands and bamboo thickets. They are known to occur up to 3,800 meters (12,500 ft) above sea level on Mount Kilimanjaro.

Servals do not have specific time for mating, but it usually happens during spring when females start looking for males. After successful mating and 73 days long pregnancy, female creates safe den and gives birth of one to three cubs.

The average lifespan for servals is about 10 years in the wild, and up to 20 years in captivity.

Cubs are blind at birth and have only 250 grams. They will open their eyes and double their size in two weeks. Young servals drink milk during first five months of their life. After that period, they will accompany their mother in hunt, until they become one year old and capable for solitary life and independent hunt.

Serval are slender cats with long legs, a lean body, a short tail, and a small head.

Their legs and ears are long and considered the largest in the cat family relative to their size.

Facial features include the brownish or greenish eyes, white whiskers on the snout and near the ears.

The coat is basically golden-yellow to buff, and extensively marked with black spots and stripes. Three to four black stripes run from the back of the head onto the shoulders, and then break into rows of spots. The spots show great variation in size. The white underbelly has dense and fluffy basal fur, and the soft guard hairs.

Serval's ears serve as radars which easily recognize sound produced by moving animal (even when they are moving in the underground tunnels). Along with other senses, ears help them find the prey quickly.

Servals have excellent sense of smell, hearing and sight, which they use both for finding the prey and for avoiding predators.

Being a solitary animal, servals only interact with other members of their species when mating, caring for young, or fighting for territory.

With a combination of long, powerful legs, deep chest, and slim build allows the serval to reach a sustained speed of 80 km/h (50 mph).

Depending on the type of prey which they hunt, servals can hunt both during the day and night. If they are living close to the humans, they sometimes hunt domestic animals, like chickens.

Serval has the biggest ears (compared to the rest of the body) and longest legs in the world of cats.

The serval has capability of leaping 3 meters (10 feet) in the air to catch birds and insects in flight. But small rodents are its most frequent prey item, and a serval doesn’t hesitate to reach a long leg down into a rodent’s burrow to snatch a meal out of the tunnel! Ultrasonic hearing ability allows the serval to hear the high-pitched communication of rodents. The cat’s long, curved claws can also hook fish and frogs right out of the water.

With its many hunting styles, varied diet, and fantastic hearing, the serval is well equipped to be the most successful predator of all the cats.

The serval is active in the day as well as at night; activity might peak in early morning, around twilight and at midnight. Servals might be active for a longer time on cool or rainy days. During the hot midday, they rest or groom themselves in the shade of bushes and grasses.

Servals are 2 to 3 ¼ feet long. Their weight ranges from 20-40 pounds. Serval's tail is quite short and covered in black rings. It has a black tip.

Like many cats, the serval is able to purr; it also has a high-pitched chirp, and can hiss, cackle, growl, grunt and meow.

The time when mating takes place varies geographically. The gestation period lasts around 74 days, after which the female normally gives birth to a litter of one to four kittens. When with young, the female is forced to spend considerably more time than usual hunting and consequently less time resting. After around a year, the female chases the young from the natal area but tolerate female offspring for a few months longer than males.

Serval has yellowish to orange-coated fur covered in black spots. Body coloration makes them invisible (well camouflaged) when they are hiding in the grass. There are no two servals with the same marks on their fur.

Servals have no major predators other than humans. Leopards and hyenas are the most probable competitors for food and territory. When African servals discover they are close to an individual of a rival species, they run away in confusing darting leaps.

The IUCN (International Union for Conservation of Nature and Natural Resources) lists the serval as least concern.

A major threat to the survival of the serval include the degradation of wetlands and grasslands.

Unlike many other cat species, servals love to climb, leap and play in water.

The name “serval” is believed to come from the Portuguese word lobo-cerval, meaning “lynx.”

Their extra-long neck and legs give them the nickname “giraffe cat.”

Servals with black coats are sometimes found in mountainous regions of East Africa.

The pelt of servals is valuable and used to make mantles worn by chiefs in native tribes.

The association of servals with human beings dates to the time of Ancient Egypt. Servals are depicted as gifts or traded objects from Nubia in Egyptian art.

Main predators of servals are humans (who hunt them for fur), leopards, hyenas and dogs.

Like many other species of felid, servals are occasionally kept as pets, although their wild nature means that ownership of servals is regulated in most countries.

Servals have excellent sense of smell, hearing and sight, which they use both for finding the prey and for avoiding predators.

One domestic cat breed, savannah, is a mix between tabbys and servals.

Servals are very successful hunters - they catch 50% of their prey. Other cat species have only 10% success rate (catch only one animal in 10 attempts). They can even catch flying birds.
Share This