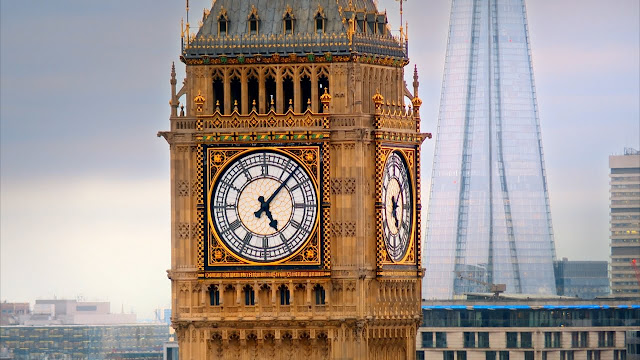 Two months after Big Ben chimed for the first time a crack developed. For four years it was out of commission. In 1863 Big Ben was turned and a smaller hammer was used. The crack that put Big Ben out of service for four years is still there.

Big Ben is the nickname for the Great Bell of the clock at the north end of the Palace of Westminster in London, and often extended to refer to the clock and the clock tower.

The first chime of Big Ben signals the hour on the dot. The clock is so accurate that a person can set their watch to it.

The bell itself is officially called the “Great Bell”, but gets its nickname from Sir Benjamin Hall, who became the first Commissioner of Public Works in 1855 and oversaw the later stages of the rebuilding of the Houses of Parliament. The previous Palace of Westminster had burned down as a result of the Great Fire of 1834.

In 1916 Big Ben was silenced and kept unlit for two years every night. World War I had begun and this effort helped to prevent making the tower a target for the Germans.

The Great Bell was cast with Sir Hall’s name inscribed upon it. The “big” part comes from the fact that the bell weighs 16 tons and is about 2.1 meters (7 feet) tall.

The first time that Big Ben was heard over BBC Radio in the United Kingdom was New Year's Eve, 1923.

The bell cracked however, and had to be replaced by another one weighing 13 tons. It is situated some 61 meters (200 feet) up the belfry.

From 1939 to 1945 the clock dials were not lit up. This was done as a preventative measure to help protect it from attack during World War II.

The tower is officially known as Elizabeth Tower, renamed as such to celebrate the Diamond Jubilee of Elizabeth II (prior to being renamed in 2012 it was known as the “Clock Tower” or St. Stephen’s Tower).

Big Ben can be heard from as far away as nine miles. It is estimated that before London was built up Big Ben could be heard further than nine miles.

Big Ben was carried to Westminster on a horse-drawn carriage, with crowds cheering on the new bell's arrival.

The clock faces are about 55 m (180 ft) over the ground. Measurements show the inner volume is 4,650 cubic meters (164,200 cubic feet). The tower’s interior is not usually open to the public except on certain occasions.

Big Ben makes noise when a hammer hits him. The bell does not move - it is hung from the belfry. The hammer weighs approximately 450 pounds.

After Big Ben was cast he had to cool for two weeks.

To reach the top one must climb 334 steps. There is no elevator installed.

The clock dials are set in an iron frame 7 meters (23 feet) in diameter, supporting 312 pieces of opal glass, rather like a stained-glass window(on each side).

Each clock face has an inscription in Latin in gold that reads “DOMINE SALVAM FAC REGINAM NOSTRAM VICTORIAM PRIMAM” or “Oh Lord, keep safe our Queen Victoria the First”.

The clock and dials were designed by Augustus Pugin.

The clock mechanism itself was designed by Edmund Beckett Denison, who was not actually a clockmaker, but a lawyer.

Until 1881 Big Ben was the British Isle's largest bell. Great Paul was cast that year and now hangs in St. Paul's Cathedral.

In 2013 Big Ben and the other bells of Elizabeth Tower were silenced out of respect for Margaret Thatcher's funeral. She was the Prime Minister of the United Kingdom from 1979 to 1990.

Big Ben chimes every fifteen minutes and can be heard for up to 8 kilometers (5 miles) around.

The clock faces are cleaned every 5 years using.A group of window washers rappels down the belfry down to the faces and have to be careful not to break the glass panes or lean on the hands.

Big Ben is really only the bell, although many people refer to the clock, the tower, and the bell as Big Ben.

In 2012 Big Ben was chimed 30 times in honor of the start of the London Olympic Games.

The clock tower is actually a little slanted and leans slightly towards the northwest by 8.66 inches. This is due to some tunnel excavation close by. Since 2003, it tilts by almost a millimeter per year.

Six million people visit London each year, and most of them will visit Westminster and see the clock tower.

In 2008 a survey of 2,000 people found that the tower was the most popular landmark in the United Kingdom.